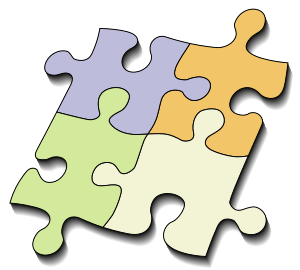 A jigsaw puzzle is a tiling puzzle that requires the assembly of often oddly shaped interlocking and tessellating pieces. Each piece usually has a small part of a picture on it; when complete, a jigsaw puzzle produces a complete picture. In some cases more advanced types have appeared on the market, such as spherical jigsaws and puzzles showing optical illusions.

Jigsaw puzzles were originally created by painting a picture on a flat, rectangular piece of wood, and then cutting that picture into small pieces with a jigsaw, hence the name. John Spilsbury, a London cartographer and engraver, is credited with commercializing jigsaw puzzles around 1760. Jigsaw puzzles have since come to be made primarily of cardboard.

Typical images found on jigsaw puzzles include scenes from nature, buildings, and repetitive designs. Castles and mountains are two traditional subjects. However, any kind of picture can be used to make a jigsaw puzzle; some companies offer to turn personal photographs into puzzles. Completed puzzles can also be attached to a backing with adhesive to be used as artwork.

During recent years, a range of jigsaw puzzle accessories including boards, cases, frames and roll-up mats has become available that are designed to assist jigsaw puzzle enthusiasts. 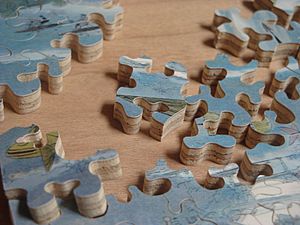 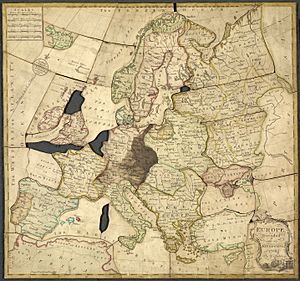 The engraver and cartographer John Spilsbury, of London, is believed to have produced the first jigsaw puzzle around 1760, using a marquetry saw. Early jigsaws, known as dissections, were produced by mounting maps on sheets of hardwood and cutting along national boundaries, creating a puzzle useful for the teaching of geography.

The name "jigsaw" came to be associated with the puzzle around 1880 when fretsaws became the tool of choice for cutting the shapes. Cardboard jigsaw puzzles appeared during the late 1800s, but were slow to replace the wooden jigsaw due to the manufacturer's belief that cardboard puzzles would be seen as being of low quality.

Jigsaw puzzles soared in popularity during the Great Depression, as they provided a cheap, long-lasting, recyclable form of entertainment. It was around this time that jigsaws came to become more complex and more appealing to adults. They were also given away in product promotions, and used in advertising, with customers completing an image of the product being promoted.

According to the Alzheimer Society of Canada, doing jigsaw puzzles is one of many activities that can help keep the brain active and may contribute to reducing the risk of developing Alzheimer's disease. 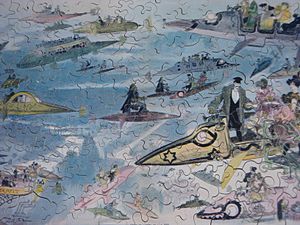 There are also smaller jigsaw puzzles that are geared towards children, and are rated by the number of pieces they contain. For very young children, a puzzle with as few as 4 to 9 'large' size pieces (so not a choking hazard) are common. These are usually made of wood or plastic, to maintain durability, and are able to be cleaned without being damaged.

A few puzzles are made double-sided, so that they can be solved from either side. This adds a level of complexity, because it cannot be certain that the correct side of the piece is being viewed and assembled with the other pieces. 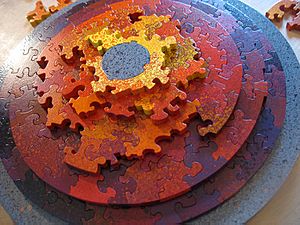 Another type of jigsaw puzzle, which is considered a 3-D puzzle, is a puzzle globe. Like a 2-D puzzle, a globe puzzle is often made of plastic and the assembled pieces form a single layer. But the final form is a three-dimensional shape. Most globe puzzles have designs representing spherical shapes such as the Earth, the Moon, and historical globes of the Earth.

There are also computer versions of jigsaw puzzles, which have the advantages of requiring zero cleanup as well as no risk of losing any pieces. Many computer-based jigsaw puzzles do not allow pieces to be rotated, so all pieces are displayed in their correct orientation. These puzzles are thus considerably easier than a physical jigsaw puzzle with the same number of pieces. 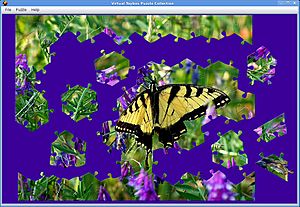 A computer puzzle website can allow users to choose their own puzzle size, cut design, and image, or upload their own images to use as puzzles. An online jigsaw version of Trolleholm Castle in Sweden may be worked and timed for speed of finishing. The New Yorker Magazine subscription website preserves images of the magazine's cover illustrations as jigsaw puzzles which are timed and offer several levels of difficulty.

Jigsaw puzzles can vary greatly in price depending on the complexity, number of pieces, and brand. Children's puzzles can be as cheap as around $5.00 while larger puzzles can be closer to $50.00. The most expensive puzzle to date was sold for $27,000 in 2005 at a charitable auction for The Golden Retriever Foundation. 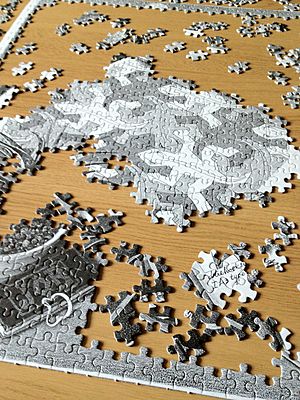 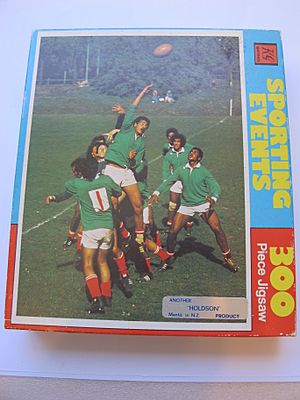 In 2016 the German company Ravensburger released their biggest puzzle. It shows 10 scenes from Disney works and has 40,320 pieces, measuring 680 cm by 192 cm when assembled.

The logo of Wikipedia is a globe made out of jigsaw pieces. The incomplete sphere appears to have some pieces missing, symbolizing the room to add new knowledge.

Jigsaw puzzle pieces were first used as a symbol for autism in 1963 by the United Kingdom's National Autistic Society. The organization chose jigsaw pieces for their logo to represent the "puzzling" nature of autism and the inability to "fit in" due to social differences, and also because jigsaw pieces were recognizable and otherwise unused. Puzzle pieces have since been incorporated into the logos and promotional materials of many organizations, including the Autism Society of America and Autism Speaks.

All content from Kiddle encyclopedia articles (including the article images and facts) can be freely used under Attribution-ShareAlike license, unless stated otherwise. Cite this article:
Jigsaw puzzle Facts for Kids. Kiddle Encyclopedia.