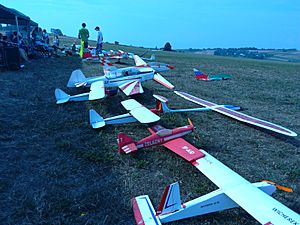 Models of radio-controlled airplanes and gliders

A model airplane is a small sized Unmanned Aerial Vehicle. It may be a replica of an existing airplane or an imaginary aircraft.

Aircraft manufacturers and researchers use wind tunnel models. They are used for testing new designs and development of new ones. Sometimes only part of the aircraft is modeled. 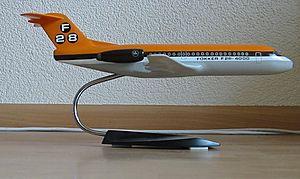 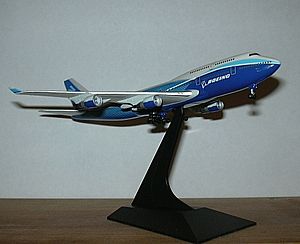 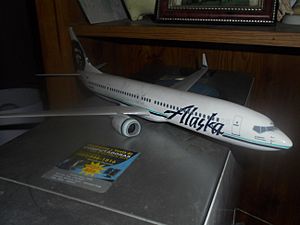 Static model aircraft (i.e those not intended to fly) are scale models are built using plastic, wood, metal or paper. Some static models are scaled for use in wind tunnels, where the data acquired is used to aid the design of full scale aircraft.

Most of the world's airlines allow their fleet aircraft to be modeled as a form of publicity. In the early days, airlines would order large models of their aircraft and supply them to travel agencies as a promotional item.

Other less popular scales are 1:50, 1:64, 1:96, and 1:128; however, old models are often revived in these scales. Many older plastic models, such as those built by Revell do not conform to any established scale. They are sized to fit inside standard sized boxes. These kits are often called "box-scale" and are often reissued in their original, unusual scales. Some helicopters used to be offered in 1:32 scale, similar to some fixed-wing aircraft models. The trend is to issue helicopters in 1:35 scale, similar to most land vehicle models.

The most common form of manufacture for kits is injection molded polystyrene plastic, using carbon steel molds. Today, this takes place mostly in China, Taiwan, the Philippines, South Korea, and Eastern Europe. Injection molding allows a high degree of precision and automation not found in other manufacturing processes. Smaller and cheaper runs can be done with cast copper molds, and some companies do even smaller runs using cast resin molds, but the quality and precision is of a lower standard than carbon steel.

The next most common form of manufacture is cast resin, using silicone rubber molds placed in vacuum chambers to reduce the incidence of bubbles in the castings. This form of manufacture is labor-intensive and involves a degree of waste because the resin attacks the silicone and the molds can only be used about 20-30 times before a new mold needs to be made. The flexibility of the mold does allow shapes and undercuts not possible with any other manufacturing method. This sort of manufacture is reserved for unusual or esoteric subjects in relatively small production runs, and are consequently far more expensive than injection molded plastic kits.

Vacuum-formed polystyrene kits are still being made, but a greater amount of effort is required by the consumer to produce an acceptable model compared to the aforementioned methods. There is a handful of photo etched metal kits which allow a high level of detail but can be laborious to assemble. Specialized kits cast in resin are available from companies such as Anigrand, Collect Aire, CMK, and Unicraft.

Scale models can be made from paper (normal or heavy) or card stock. Commercial models are printed by publishers mainly based in Eastern Europe. Card models are also distributed through the internet, and several are offered this way for free. Card model kits are not limited to just aircraft, with kits being available for all types of vehicles, buildings, computers, firearms and animals.

From the World War I through the 1950s, model airplanes were built from light weight balsa wood and often covered with tissue paper. This was a difficult, time consuming procedure that mirrored the actual construction of airplanes through the end of World War II. The Cleveland Model and Supply Corporation made the most challenging kits, although many model makers became adept at creating models from actual aircraft drawings.

Ready-made models (desk-top models) include those produced in fibreglass for travel agents and aircraft manufacturers, as well as collectors models made from die-cast metal, mahogany and plastic. . Snap Fit plastic plane models are manufactured by Wooster, Long Prosper, and Flight Miniatures 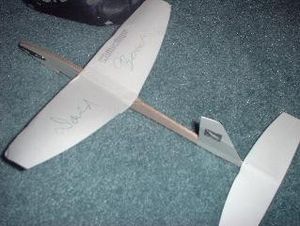 Flying models are usually what is meant by the term aeromodelling. Most flying model aircraft can be placed in one of three groups:

Some flying models resemble scaled down versions of piloted aircraft, while others are built with no intention of looking like piloted aircraft. There are also models of birds and flying dinosaurs.

All content from Kiddle encyclopedia articles (including the article images and facts) can be freely used under Attribution-ShareAlike license, unless stated otherwise. Cite this article:
Model airplane Facts for Kids. Kiddle Encyclopedia.