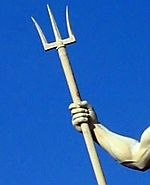 A trident is a three-pronged spear. It is used for spearfishing. Historically it was used as a polearm. Gladiators used them in Ancient Rome after they cast a net to trap their opponent. The trident is the weapon of Poseidon, or Neptune, the god of the sea in classical mythology. In Hindu mythology it is the weapon of Shiva, known as trishula (Sanskrit for "triple-spear"). The word "trident" comes from the French word trident, which in turn comes from the Latin word tridens.

All content from Kiddle encyclopedia articles (including the article images and facts) can be freely used under Attribution-ShareAlike license, unless stated otherwise. Cite this article:
Trident Facts for Kids. Kiddle Encyclopedia.