Camden is a town in Knox County, Maine, United States. The population was 4,850 at the 2010 census. The population of the town more than triples during the summer months, due to tourists and summer residents. Camden is a famous summer colony in the Mid-Coast region of Maine. Similar to Bar Harbor, Nantucket and North Haven, Camden is well known for its summer community of wealthy Northeasterners, mostly from Boston, New York and Philadelphia.

Penobscot Abenaki Indians called the area Megunticook, meaning "great swells of the sea", a reference to the silhouette of the Camden Hills (more visibly seen on a bright night). Part of the Waldo Patent, it remained wilderness until after the French and Indian War. It was first settled about 1771–1772 by James Richards, who built a home at the mouth of the Megunticook River. Others soon followed, some making modest attempts to farm the broken and often mountainous terrain. The first home in the area was the Conway House, a Cape Cod style home built in 1770. In 1962, it was purchased and renovated into a history museum.

When Castine was held by the British in 1779, Camden became a rendezvous point and encampment for the Americans, who were commanded by Major George Ulmer. During a raid, the British burned a sawmill. On February 17, 1791, the Massachusetts General Court incorporated Megunticook Plantation as Camden, named after Charles Pratt, 1st Earl Camden, a member of the British Parliament and proponent of civil liberties. During the War of 1812, a battery was built atop Mount Battie near the village. It had both a 12- and 18-pounder gun, but no gunner qualified to operate them. Nevertheless, the fort's appearance of readiness kept the British at bay.

When peace returned, Camden grew rapidly. The Megunticook River provided excellent water power sites for mills. In addition to sawmills and gristmills, by 1858 the town had carriage factories, sash and blind factories and blacksmith shops. There were six shipyards, launching ten to twelve vessels annually. By 1886, the town also made foundry products, railroad cars, woolens and paper mill feltings, anchors, wedges, plugs and treenails, planking, powder kegs, excelsior, mattresses, powder, tinware, oakum, wool rools, boots and shoes, leather, flour and meal, corn brooms and barrels. Camden was second only to nearby Rockland in the lucrative manufacture of lime, excavated at quarries and processed in kilns before being shipped to various ports around the United States until 1891, when Rockport was set off as a separate town. As the 19th century came to an end, Camden was very much a shipbuilding town with the H.M. Bean Yard launching the largest four-masted schooner Charlotte A. Maxwell and the first six-master ever built-the George W. Wells.

In the 1880s, sportsmen and "rusticators," began to discover the natural beauty of Camden during the summer and autumn, becoming seasonal residents. Sarah Orne Jewett’s stories of nostalgia for the sea, Camden’s unique scenery, fine old homes of sea captains, and the paintings of Fitz Hugh Lane, Frederick Church, and Childe Hassam evoked a romantic vision of Maine and induced many to come to stay at the Bayview House Hotel, Ocean House, and Mrs. Hosmer’s Boarding House. In 1880, Edwin Dillingham built the first purpose-built summer cottages in Camden on Dillingham Point. Thereafter, the summer colony at Camden quickly grew to include some of the wealthiest, most prominent families in the country. These new summer residents from Philadelphia, Boston, New York, Washington, D.C. and even Chicago, built large, rambling Shingle Style "cottages" along High Street, Bay View Street and on Beauchamp Point to rival those in Bar Harbor. The summer people arrived on the Boston Boats or on the Maine Central Railroad at Rockland. Local residents, who had formerly gone to sea to earn a living, found jobs as caretakers, gardeners, and carpenters to the rich and powerful.

In November 1892, a fire fed by a strong easterly wind-burned the business district to the ground. Immediately, Camden businessmen drew together to make the tremendous investment to build 12 large brick buildings, including the Camden Opera House and, controversially, the Masonic Temple (now the Lord Camden Inn). The Great Fire, as it became known, did not, however, discourage increasing numbers of affluent summer people from making Camden their summer enclave. Indeed, in 1897 a road was built to the top of Mt. Battie, one of the two mountains rising majestically above the town, and an inn was erected at the summit. In 1898, a group of wealthy summer residents from Philadelphia established the Megunticook Golf Club on Beauchamp Point. And in 1901, the famous Whitehall Inn opened on High Street in an old mansion built by a sea captain, catering to a well-to-do clientele. Around the turn of the century families such as Curtis, Bok, Keep, Gribbel, Dillingham and Borland not only built beautiful estates but their generosity to the community resulted in the elegant public library, the classical amphitheatre, which was designed by Fletcher Steele, the Camden Harbor Park, which was designed by the Olmsted Brothers, the Village Green, and the Camden Opera House.

The Philadelphia publishing tycoon, Cyrus Curtis, maintained a summer home and several yachts in Camden. Given the many other magnificent private yachts of the upper class that filled Camden Harbor as well, Curtis decided in 1912 to establish and build the Camden Yacht Club. In 2006, as part of the Club's centennial celebrations, the Club published 'From steam to sail : 100 years of the Camden Yacht Club" Yachting continues to thrive in Camden, particularly during the summer months, with the unique HAJ Boat racing fleet at the Yacht Club with the younger sailors in their turnabouts. In 1936 the cruise schooner business was started by Captain Frank Swift and the windjammer fleet continues to this day.

Music and cultural interests have long flourished in Camden. In 1912, Edna St. Vincent Millay read "Renascence," a poem she wrote from the top of Mt. Battie, to the guests at the Whitehall Inn, one of whom offered to pay her tuition to Vassar. After graduating from Vassar, she went on to write poetry and plays that made her one of the most famous women in America and an inspiration for the Roaring Twenties, winning the Pulitzer Prize. The world-famous French harpist, composer and conductor, Carlos Salzedo, founded the internationally renowned Salzedo Summer Harp Colony in Camden and each summer held a Harp Festival in the amphitheater beside the library. Camden/Rockport also is home to the Bay Chamber Concert Company. Theatre productions at the Opera House and Shakespeare in the Amphitheatre enriched the lives of residents and summer visitors for generations. In the 1950s, artists and writers of significant reputation began moving to Camden and neighboring Rockport, where local artists organized Maine Coast Artists. Wayne Doolittle began publishing Down East Magazine in 1954, and in 1956 Carousel was filmed in Camden, followed by Peyton Place in 1957, because the quaint, old town with its extremely picturesque harbor and the beautiful scenery, looked like the picture-perfect American town. Since then Camden's charm and beautiful setting have not gone unnoticed by Hollywood with Steven King's Thinner in 1995, In the Bedroom in 2001, and with the soap opera Passions using Camden for shots depicting the fictional town Harmony.

Camden's many prominent summer and year-round residents have been a valuable resource to the town in many ways over the past 125 years, a tradition of partnership which continues today in many forms, not least by helping to establish some internationally renowned events, namely The Camden Conference and Pop!Tech. The Camden Conference has been held annually for nearly a quarter of a century to foster informed discourse on world issues. Convened in the historic Camden Opera House, the event draws some of the best minds on foreign policy to share their insights and expertise on a range of global issues. The Pop!Tech conference, which takes place each fall, gathers a global community of cutting-edge leaders, thinkers, and doers from many different disciplines to explore the social impact of new technologies, the forces of change shaping our future, and new approaches to solving the world’s most significant challenges.

During the second weekend of February, the annual U.S. National Toboggan Championships are held at the town-owned Camden Snow Bowl. This nationally-known race started as a lark for something to do during the long Maine winters, and more than 20 years later is one of New England's premier cold-weather events. The iced chute is 400 feet (120 m) long, and the four-man teams attain speeds of up to 35 miles (56 km) an hour. Most racers arrive in costume, and 100% percent of race revenue is used to offset operating expenses for this recreation area.

Camden is the location of the 2000 HGTV Dream Home. 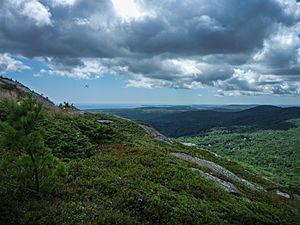 The view from Bald Mountain, Camden

The town is crossed by U. S. Route 1 and state routes 52 and 105. It borders the towns of Rockport to the south, Hope to the southwest, and Lincolnville to the north.

There were 2,382 households of which 21.4% had children under the age of 18 living with them, 43.7% were married couples living together, 8.3% had a female householder with no husband present, 3.1% had a male householder with no wife present, and 44.9% were non-families. 39.2% of all households were made up of individuals and 22.4% had someone living alone who was 65 years of age or older. The average household size was 2.01 and the average family size was 2.65.

All content from Kiddle encyclopedia articles (including the article images and facts) can be freely used under Attribution-ShareAlike license, unless stated otherwise. Cite this article:
Camden, Maine Facts for Kids. Kiddle Encyclopedia.