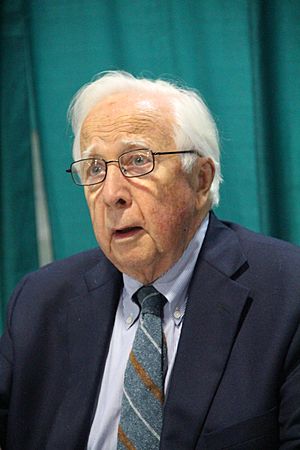 David Gaub McCullough (born July 7, 1933) is an American author, narrator, historian, and lecturer. He is a two-time winner of the Pulitzer Prize and the National Book Award and a recipient of the Presidential Medal of Freedom, the United States' highest civilian award.

McCullough was born on July 7, 1933 in Pittsburgh, Pennsylvania. He is of Scottish-Irish descent. He studied at Shady Side Academy and at Yale University. McCullough has been married to Rosalee Ingram Barnes since 1954.

All content from Kiddle encyclopedia articles (including the article images and facts) can be freely used under Attribution-ShareAlike license, unless stated otherwise. Cite this article:
David McCullough Facts for Kids. Kiddle Encyclopedia.