The Camden Public Library is the public library serving Camden, Maine, United States. It is a National Historic Landmark and is listed on the National Register of Historic Places.

The library is located at 55 Main Street on the north bank of the Megunticook River, on the north end of the Chestnut Street Historic District.

In 1854, the Ladies’ Library Association opened on Wood Street. The library later moved to the second floor of the Camden National Bank building and remained at this location until the fire of 1892 that destroyed the Camden business district. 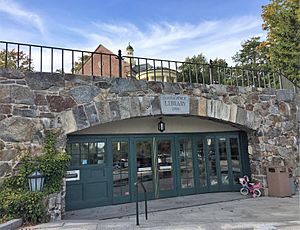 New, lower level entrance to the library that was added in the 1990s, September 2018

On March 23, 1896, the citizens of Camden voted to establish a free public library to be known as the Camden Public Library. The townspeople of Camden raised the money to build this library through various fundraising efforts. No assistance was provided by philanthropists. Mary Louise Curtis Bok donated the land for the library in 1916. Parker Morse Hooper and Boston architect Charles G. Loring offered building plans. The cornerstone was laid on August 17, 1927 and the Library opened its doors on June 11, 1928 with Miss Katherine W. Harding serving as the first librarian. The grounds of the library, including an amphitheater, were designed by noted landscape architect Fletcher Steele. The library and its grounds were designated a National Historic Landmark on February 27, 2013, recognized as a rare public work by Steele, and as a forerunner of modern landscape design.

In 1996 the library underwent a great expansion under the south lawn.

The library is one of the only libraries in Maine designated as a "Star Library" by Library Journal.

All content from Kiddle encyclopedia articles (including the article images and facts) can be freely used under Attribution-ShareAlike license, unless stated otherwise. Cite this article:
Camden Public Library Facts for Kids. Kiddle Encyclopedia.