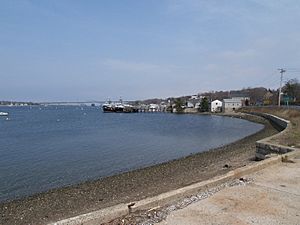 The Sakonnet River as viewed from Portsmouth, Rhode Island, looking south towards the Atlantic Ocean.

The Sakonnet River is a tidal strait in the state of Rhode Island which flows approximately 14 miles between Mount Hope Bay and Rhode Island Sound. It separates Aquidneck Island from the eastern portion of Newport County.

Below is a list of all crossings over the Sakonnet River. The list begins at the headwaters and goes downstream.

All content from Kiddle encyclopedia articles (including the article images and facts) can be freely used under Attribution-ShareAlike license, unless stated otherwise. Cite this article:
Sakonnet River Facts for Kids. Kiddle Encyclopedia.