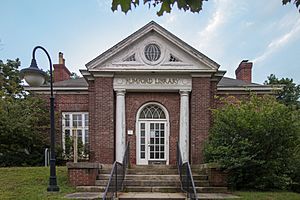 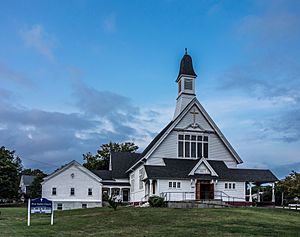 Rumford, Rhode Island, is the northern section of the city of East Providence. It borders Seekonk, Massachusetts, Pawtucket, Rhode Island and the Ten Mile River.

Roger Williams originally settled near (what is now) the intersection of Roger Williams and Wilson Avenues and long considered Phillipsdale. In April 1636, after the corn had been planted, the settlement was told that Plymouth Colony claimed all land to the Seekonk River which is just to the west. Thus, Roger Williams paddled down the Ten Mile to the Seekonk and encountered Native Americans who greeted him with the phrase "What Cheer, Neetop" (Hello, friend). He named his new settlement Providence.

Samuel Newman and his followers migrated to the area and established a huge town common in what was then Rehoboth, Massachusetts and now Rumford. They gave the roundabout a distinctive name: "The Ring of the Green." Newman Congregational Church (founded 1643, current building dates to 1810) still stands at the intersections of Pawtucket Avenue, Newman Avenue and Ferris Avenue.

Rumford has previously been part of three towns and two states; Rehoboth, Massachusetts, Seekonk, Massachusetts, and East Providence, Rhode Island. It became part of Rhode Island in 1862. Rumford Baking Powder was made in the town at the Rumford Chemical Works and was named after Sir Benjamin Thompson, Count Rumford.

Wannamoisett Country Club (1898) was established in Rumford on land rented from Rumford Chemical Works. This country club and golf course, re-designed by Donald Ross, is spread out over 100 acres (0.4 km2) on Hoyt Avenue, and hosts the Northeast Amateur Invitational Golf Tournament each year. The PGA Championship was played here in 1931.

Agawam Hunt Club (1897) is also located in Rumford. It was re-designed by Donald Ross in 1920 as an 18-hole course and underwent a reconstruction in the mid-1960s.

Narragansett Park was situated in Pawtucket off Newport Ave, but had its barn area across the city line in the Rumford section.

Several Native American tribes originally settled in the area and were mostly Wampanoag. About 150 acres (61 ha) of the Rumford area, encompassing the historic heart of old Seekonk and the 19th-century center of East Providence, was listed on the National Register of Historic Places in 1980.

All content from Kiddle encyclopedia articles (including the article images and facts) can be freely used under Attribution-ShareAlike license, unless stated otherwise. Cite this article:
Rumford, Rhode Island Facts for Kids. Kiddle Encyclopedia.