Kids Encyclopedia Facts
This page is about the town in Bristol County, Massachusetts. For the census-designated place and village situated therein, see Norton Center, Massachusetts.

Norton is a town in Bristol County, Massachusetts, United States, and contains the village of Norton Center. The population was 19,031 at the 2010 census. Home of Wheaton College, Norton hosts the Deutsche Bank Championship as well as a tournament of the PGA Tour held annually on the weekend preceding the Labor Day holiday at the TPC Boston golf club.

Norton was first settled in 1669 and was called North Taunton for its location on the northern border of Taunton, Massachusetts. The town was renamed "Norton"—after Norton, Oxfordshire, England, where many early settlers had originated—when the town was officially established on March 17, 1710. Parts of Norton were originally established as Easton on December 21, 1725, and as Mansfield on April 26, 1770.

Metacomet, the Wampanoag Indian sachem also known as "King Phillip", is said to have hidden in a cave here near the end of King Philip's War before meeting his death in Hockomock Swamp. According to one source, "Every Norton school child has been entertained with the legend of King Phillip's Cave."

The bandstand within the town center was originally erected using donated funds during the first Gulf War, in honor of the veterans who served from Norton.

Norton is a small but growing town. In elementary school, students were told the story of the "Devil's Foot Print," where James Wetherall sold his soul to the devil. The devil's foot print can be seen at Norton's Joseph C. Solmonese Elementary School. Every 26 years, the school unburies a time capsule, the last of which was buried in 1999. The time capsule will be opened next in 2026. The Sun Chronicle describes:

So it was in December 1997, when a traffic light was installed at the intersection of routes 123 and 140 in Norton. It was the town's first full traffic light and, in a manner of speaking, it declared "Norton isn't Mayberry anymore."

Norton is also a location in the claimed paranormal Bridgewater Triangle. 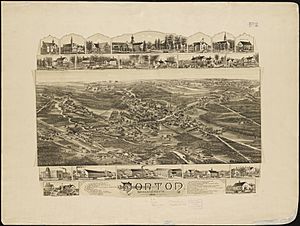 According to the United States Census Bureau, the town has a total area of 29.8 square miles (77 km2), of which 28.7 square miles (74 km2) is land and 1.1 square miles (2.8 km2), or 3.72%, is water. Norton is generally low and swampy. The waters of the area are fed by the Wading River and the Canoe River, both of which feed into the Taunton River downstream. The two largest bodies of water in town are the Norton Reservoir, north of the center of town, and Winnecunnet Pond on the east (on the north side of I-495), which is fed by the Canoe River and feeds into the Mill River.

The town is bisected southeast to northwest by Interstate 495, as well as Massachusetts Route 140 from north to south and Massachusetts Route 123 from southwest to northeast. Interstate 495's Exit 10 links the highway with Route 123. Exit 9 (Bay Street, Taunton) and Exit 11 (Route 140, Mansfield/Norton) are just over the town lines. Route 140 and Route 123 intersect at the center of town, by the town green. Although it is not officially signed as such, many fans attending concerts and events at the Comcast Center, formerly the Tweeter Center, and originally The Great Woods Center for the Performing Arts, just over the line in Mansfield along Route 140, reach the venue by driving along Route 123 to Route 140. The town is also a part of the Greater Attleboro Taunton Regional Transit Authority (or GATRA) bus line. The nearest MBTA station is Mansfield.

There were 5,872 households out of which 42.3% had children under the age of 18 living with them, 61.8% were married couples living together, 10.8% had a female householder with no husband present, and 23.8% were non-families. 19.3% of all households were made up of individuals and 6.9% had someone living alone who was 65 years of age or older. The average household size was 2.79 and the average family size was 3.22.

All content from Kiddle encyclopedia articles (including the article images and facts) can be freely used under Attribution-ShareAlike license, unless stated otherwise. Cite this article:
Norton, Massachusetts Facts for Kids. Kiddle Encyclopedia.