Kids Encyclopedia Facts
For other places with a similar name, see Attleborough (disambiguation). 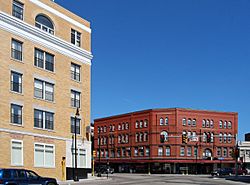 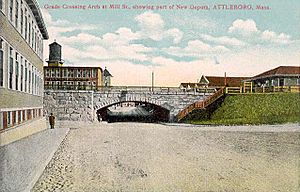 Attleboro is a city in Bristol County, Massachusetts, United States. It was once known as "The Jewelry Capital of the World" for its many jewelry manufacturers. According to the 2010 census, Attleboro had a population of 43,593 in 2010.

In 1634, English settlers first arrived in the territory that is now Attleboro. It was later incorporated from Rehoboth in 1694 as the town of Attleborough. It included the towns of Cumberland, Rhode Island, until 1747 and North Attleborough, Massachusetts, until 1887. The town was reincorporated in 1914 as the City of Attleboro, with the "-ugh" removed from the name, although North Attleborough kept it. Like many towns in Massachusetts, it was named for a British town.

It is rumored that George Washington once passed through Attleborough and stayed near the Woodcock Garrison House at the Hatch Tavern, where he exchanged a shoe buckle with Israel Hatch, a revolutionary soldier and the new owner of the Garrison House.

The city became known for jewelry manufacturing in 1913, particularly because of the L.G. Balfour Company. That company has since moved out of the city, and the site of the former plant has been converted into a riverfront park. Attleboro was once known as "The Jewelry Capital of the World", and jewelry manufacturing firms continue to operate there. One such is the Guyot Brothers Company, which was started in 1904. General Findings, M.S. Company, James A. Murphy Co., Garlan Chain, Leach & Garner, and Masters of Design are jewelry manufacturing companies still in operation.

The Ten Mile River, fed by the Bungay River and by several brooks, runs through the center of Attleboro. The Manchester Pond Reservoir lies beside Interstate 95, and there are several small ponds in the city. There are two reservation areas, the Antony Lawrence Reservation Area and Coleman Reservation Area, as well as the Bungay River Conservation Area in the north of the city. The highest point in Attleboro is 249-foot (76 m) Oak Hill, located in the southern part of the city north of Oak Hill Avenue. 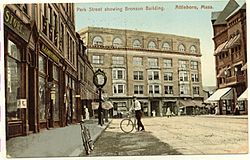 Attleboro has four museums: the Attleboro Arts Museum, the Attleboro Area Industrial Museum, the Women at Work Museum, and the Museum at the Mill. Other places of interest in the city include: Capron Park Zoo; L.G. Balfour Riverwalk, which was once the site of the L.G. Balfour jewelry plant, adjacent to the downtown business district; La Salette Shrine, which has a display of Christmas lights; Triboro Youth Theatre / Triboro Musical Theatre; Attleboro Community Theatre; and Dodgeville Mill.

In December 2011, the City of Attleboro was awarded $5.4 million in state and federal funding to support revitalization efforts within the city's Historic Downtown area. The city's "Downtown Redevelopment and Revitalization Project" is intended to transform underutilized industrial and commercial parcels into areas of mixed use that include commercial, recreational, and residential space. The project also includes transportation improvements to both MBTA rail and GATRA bus services along with enhanced road construction.

Congressman Jim McGovern highlighted the importance of this project in 2011 by saying, "This transformative funding presents a landmark opportunity for Attleboro to reshape its downtown and make a strong community even stronger. The new transit plan, when implemented, will make Attleboro a model for other small cities, and the aggressive reclaiming of contaminated sites will enhance economic development."

Attleboro is located beside Interstate 95 (which enters the state between Attleboro and Pawtucket, Rhode Island), I-295 (whose northern terminus is near the North Attleborough town line at I-95), US Route 1, and Routes 1A, 118, 123 and 152, the last three of which intersect at Attleboro center. The proposed Interstate 895 was to run through Attleboro and have a junction at the present day I-295/I-95 terminus. When driving from Rhode Island on I-295, the stub exits before the half-cloverleaf exit to I-95.

The city is home to two MBTA commuter rail stations: one in the downtown area and the other in the South Attleboro district, near the Rhode Island border. Attleboro and Taunton are both served by the Greater Attleboro Taunton Regional Transit Authority, or GATRA, which provides bus transit between the two cities and the surrounding regions.

Religions represented in Attleboro reflect the historic ethnic makeup of the community. The three Roman Catholic churches—St. John, St. Theresa of the Little Flower, and St. Vincent de Paul—reflect the English and Irish, the former French (now Hispanic), and the Portuguese neighborhoods, respectively.

All Saints Episcopal Church (1890) on North Main Street provides a traditional Anglican presence, although the church is now very diverse. In 2007 it divided over the liberal policies of the US Episcopal Church, resulting in the establishment of All Saints Anglican Church in the Hebronville village of Attleboro. This church is affiliated with an Anglican diocese in Uganda.

Centenary United Methodist Church on North Main Street began on November 26, 1865, as a fellowship meeting in a building on Railroad Avenue. The first church building on the present site was dedicated in 1896 under the name of Davis Methodist Episcopal Church. The structure was destroyed by fire in 1883. The rebuilt church was named Centenary Methodist Episcopal Church in 1884, commemorating American Methodism's 100th anniversary. In 1998 Centenary and the Hebron Methodist were consolidated into one church.

Second Congregational Church (1748), near the town common, is typical of a New England town and is the founding church of what was then East Attleboro. It is a daughter church of the First Congregational Church in the Oldtown section of North Attleborough. Originally located in a meeting house on what is now the common, Second Congregational had a stately white clapboard building built in 1825. It was removed in the early 1950s to make way for the addition of a new Fellowship Hall and education rooms. The main red brick building and clock tower were built in 1904 beside the white church. In the early 1960s the interior of the sanctuary and the entrance were dramatically remodeled, resulting in a blend of high Victorian style and the open feel of mid-century modern. The church owns the Old Kirk Yard Cemetery to its rear, where many of the town's earliest families are buried. In its tower is the clock, owned originally by the city and now by the church. The Jack & Jill School has operated at the church for over 60 years. One of the city's elementary schools is named in honor of the church's first settled minister, the Reverend Peter Thacher.

All content from Kiddle encyclopedia articles (including the article images and facts) can be freely used under Attribution-ShareAlike license, unless stated otherwise. Cite this article:
Attleboro, Massachusetts Facts for Kids. Kiddle Encyclopedia.