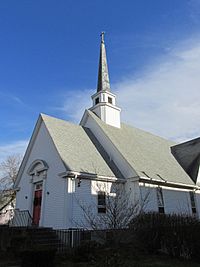 South Attleboro is a neighborhood of Attleboro, a city in Bristol County, Massachusetts, United States. It is perhaps best known for the South Attleboro station on the Attleboro/Stoughton Line of the MBTA Commuter Rail. U.S. 1 (the old Norfolk and Bristol Turnpike) and Route 1A (the old Lower Boston Post Road) pass through the area, which lies just north of the Rhode Island state line. The neighborhood is occasionally referenced in the animated series Family Guy, as being home of "Jack's Joke Shop." The real Jack's Joke Shop was located on Tremont Street in Boston, MA, until it closed.

Also, South Attleboro is home to 2 schools Robert J Coelho middle school and Hill Roberts elementary school. Lees pond park, off of Route 1, attracts many locals for activities such as fishing, basketball, baseball, and even swimming in a pool. Route 1 hosts many businesses and many fast food restaurants. Depending on the boundaries. South Attleboro has approximately 7-10 thousand people. Before the end of the industrial boom, most residents worked in the mills of Pawtucket and Central falls. In addition, the H&B factory on the border employed over 1 thousand workers before shutting down in 1957. In early 2016, it was demolished.

All content from Kiddle encyclopedia articles (including the article images and facts) can be freely used under Attribution-ShareAlike license, unless stated otherwise. Cite this article:
South Attleboro, Massachusetts Facts for Kids. Kiddle Encyclopedia.