The villages of Attleboro Falls and North Attleborough Center are located in the town.

North Attleborough [formerly a part of Attleborough] is an industrial town on the Rhode Island border. In pre-Colonial times, it was the site of the Bay Path, a major Indian trail to Narragansett Bay, the Seekonk River and Boston. John Woodcock and family established a small settlement in North Attleborough in 1669, which subsisted on agriculture, fishing and hunting. By 1670, Woodcock had received a license to open a tavern. The settlement was attacked during King Philip's War, with two killed and one home burned, but the garrison house which Woodcock had built survived the attack. The Woodcock-Garrison house was used as sleeping quarters for George Washington on his army's march to Boston to rid the city of General Thomas Gage's troops. The Garrison house is still open for tours and is an especially popular destination for field trips by local school children.

By 1776, there were 2200 people living in North Attleborough. In about 1780, a French settler set up a forge for working brass and the industrial era arrived in Attleborough. Englishmen brought with them British machinery from Birmingham in 1794 and designed American improvements in button making which they patented. During the 18th and early 19th centuries, small grist and sawmills were built along the Ten Mile River, and subsequently established nail factories were eventually eclipsed by cotton spinning mills. The development of cotton spinning was spurred by the embargo on imports resulting from the War of 1812. Textiles and jewelry manufacturing were the staple industries of the town by 1832 but buttons were king. By 1834, it was said that North Attleboro produced more buttons than anywhere else in the United States.

Through the 19th century there was tremendous growth and innovation in the jewelry industry and the number of firms in the town increased sharply. By 1855, there were 24 shops making almost $1 million in jewelry in both Attleborough and North Attleborough. The American Civil War spurred their growth with profitable U.S. Army orders for badges and medals. In 1887, North Attleboro was officially incorporated as a town. Today it is a thriving center of business and commerce with a small industrial park and many shops and stores along US Route 1 which travels through the center of town.

In 2006, North Attleborough was rated in the top ten for professional sports communities in the entire country and was also listed as one of the most affordable and safest places to raise a family.

According to the United States Census Bureau, the town has a total area of 19.0 square miles (49 km2), of which 18.6 square miles (48 km2) is land and 0.4 square miles (1.0 km2) (2.15%) is water. The town is roughly quadrilateral-shaped, and makes the northwest corner of Bristol County. It is bordered by Plainville to the north, Mansfield to the east, Attleborough to the south, and Cumberland, Rhode Island to the west. Localities include Adamsdale, Attleborough Falls and Sheldonville Farms. The town is located 16 miles north of Providence, Rhode Island, 38 miles southwest of Boston and 42 miles southeast of Worcester, Massachusetts.

The town has several rivers, streams and brooks running through it, including the Ten Mile River and the Seven Mile River. There are several ponds and lakes, including Greenwood Lake (site of a fish hatchery) and Falls Pond, among others. The town's largest park, World War I Memorial Park, is located in the northern part of town and contains the highest point in Bristol County - Sunrise Hill (Watery Hill) at 390 feet above sea level. World War I Memorial Park features a petting zoo, Petti Field for soccer and lacrosse and a ski/sledding hill with J-bar ski lift which is currently inoperable. There is also the North Attleborough Arboretum adjacent to the park.

On High Street, one block from Route 1A is an ice-skating pond called Titus Pond which is maintained by the North Attleborough Rotary Club and filled each winter by the Fire Department. 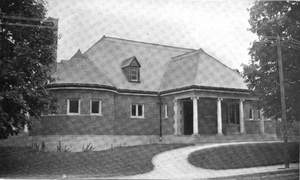 "The North Attleborough Public Library was established in 1889, by the North Attleborough Union Improvement District, which turned its library over to the town." Today the Richards Memorial Library is located downtown, and is a member of SAILS library network, a network of libraries in Southeastern Massachusetts. In fiscal year 2008, the town spent 0.77% ($572,874) of its budget on its public library—some $20 per person.

Interstates 95 and 295 meet just over the Attleborough line, and both run through the town. Each interstate has one exit within town. The town is also bisected by U.S. Route 1, which runs through the retail and downtown districts. Massachusetts state routes 120 and 152 also run through town, as does the "middle" portion of Route 1A, which begins in the town. 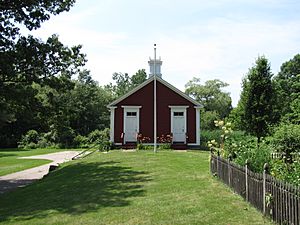 The Town of North Attleboro has a robust public school system. The North Attleborough Public School District runs 8 public schools and has a total enrollment of approximately 4,000 students. The current superintendent is John Antonucci. There are 7 elected School Committee members. Students are also part of formal School Committee proceedings. In 2019, the school department expenditures were $60,745,000 with a per pupil average expenditure of $13,850.

In April 2018, citizens voted and approved a $6,500,000 increased tax levy after the town's budget needs were lagging. The tax override was, in part (approximately 40%), to increase funding for the public schools. Even with the fiscal conservative history of the town, the override passed with 57% of voters approving the measure. The town made immediate investments to advance school infrastructure projects and staffing, public safety and community services.

Massachusetts has the nation's top ranked public schools and North Attleborough Public Schools (NAPS) has received high marks for Academics, Quality Teachers, College Prep, and Health & Safety according to niche.com and other sources.

The following schools make up the North Attleborough Public Schools: 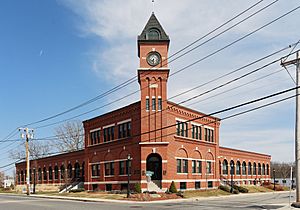 Interstates 95 and 295 meet just over the Attleborough line, and both run through the town. Each interstate has one exit within town. The town is also bisected by U.S. Route 1, which runs through the retail and downtown districts. Massachusetts state routes 120 and 152 also run through town, as does the "middle" portion of Route 1A, which begins in the town.

The Balfour Co. Building in North Attleboro, Massachusetts was a branch of the L.G. Balfour Company, a jewelry company that employed many residents of Attleboro and North Attleboro, and is a significant part of the town’s history. The building, left abandoned for decades, is a prime example of urban blight in the town and was often regarded as the town’s biggest eyesore, as it was incredibly run down and dilapidated. In a 2014 attempt to begin revitalizing the town, developers expressed interest in the Balfour building and plans were underway to build a new apartment building and bus stop in its place. However, after an initial overhaul of the area’s infrastructure, such as water mains and streets, the developers pulled out after being unable to finance the forty million dollar revitalization.

In 2017, Boston Realty Advisors secured a loan that will allow them to completely develop the area of the old Balfour building into a Class A apartment complex that will have 193 units and 11,500 square feet of retail space. This mixed-use zoning / development allows for one development to house different functions-- the new building on 21 East Street will have a gym, restaurant, retail space, and shuttles to MBTA stations in addition to the apartments. This transit-oriented development places residents close to public transportation, which reduces travel times. Both the mixed-use development and the transit-oriented development combat urban sprawl, which is all too common in the Boston-Providence suburbs. The new apartment complex will not only bring large amounts of tax revenue to North Attleboro, but create new Class A, a type of luxury apartment, that will bring in high-income tenants.

Though this infill of an old, abandoned building is beneficial in many ways and a useful response to blight occurring in the town, an oversight by planners and developers regarding the drainage of a swamp that used to exist beneath U.S. Route 1 shifted environmental burdens towards neighboring, lower-income households. The new building at 21 East Street has shifted drainage and flooded nearby homes, according to residents. In spite of these complaints, the town gave the developers permission to open two of three buildings, while they have sixty days to address the drainage problem; this issue raised concerns and questions about the role of municipal governments in overseeing such large and impactful projects.

All content from Kiddle encyclopedia articles (including the article images and facts) can be freely used under Attribution-ShareAlike license, unless stated otherwise. Cite this article:
North Attleborough, Massachusetts Facts for Kids. Kiddle Encyclopedia.