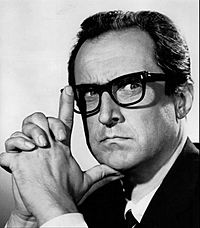 Bowen died on February 16, 1996 while on vacation in Marathon, Florida from a heart attack, aged 63. The day before, McLean Stevenson who played Henry Blake in the television show, died.

All content from Kiddle encyclopedia articles (including the article images and facts) can be freely used under Attribution-ShareAlike license, unless stated otherwise. Cite this article:
Roger Bowen Facts for Kids. Kiddle Encyclopedia.