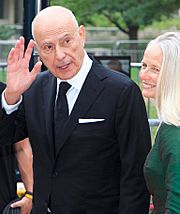 Alan Wolf Arkin (born March 26, 1934) is an American movie, stage, television actor, director, musician, and singer with a career that had last for 55 years. He is mostly known for his Academy Award winning role as Edwin Hoover in Little Miss Sunshine (2006) and for his award-nominated role as Lester Siegel in Argo (2012).

Arkin has also appeared in small-roles or cameo appearances such as in The Muppets (2011). He has won a BAFTA Award, a Golden Globe Award, a Genie Award, a Drama Desk Award, and a Tony Award.

In 2019, he will star in the Disney movie Dumbo as J. Griffin Remington.

Arkin was born in Brooklyn, New York City on March 26, 1934. He was educated at Bennington College and The Second City.

All content from Kiddle encyclopedia articles (including the article images and facts) can be freely used under Attribution-ShareAlike license, unless stated otherwise. Cite this article:
Alan Arkin Facts for Kids. Kiddle Encyclopedia.