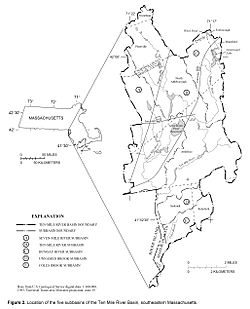 The Bungay River in context.

The Bungay River is a short river in southeastern Massachusetts that is a tributary of the Ten Mile River.

The Bungay River begins in Witch Pond in Foxborough, Massachusetts at an altitude of about 157 feet (48 m) above sea level. It flows south through Greenwood Lake and through North Attleboro and Attleboro. It enters the Ten Mile River in Attleboro and ultimately empties into Narragansett Bay. It is 7.2 miles (11.6 km) long.

According to published judgments by the Massachusetts Executive Office of Environmental Affairs, the river flows through the best red maple swamp in Massachusetts and provides some of the best canoeing across the state. It and surrounding wetlands are under study as wildlife preservation areas.

The West Branch and Black Brook are the only named tributaries, though there are many unnamed streams that also feed it.

Bungay Lake (Greenwood Lake on federal maps) is a 110-acre (0.45 km2) private lake in North Attleboro and Mansfield. It was first formed by a dam on the Bungay River in the 18th century near its confluence with the West Branch. It is classified as class A water.

All content from Kiddle encyclopedia articles (including the article images and facts) can be freely used under Attribution-ShareAlike license, unless stated otherwise. Cite this article:
Bungay River Facts for Kids. Kiddle Encyclopedia.