| population_as_of = 2020 | population_est = | pop_est_as_of = | population_footnotes = | population_total = 85 . Luke was also home of an automobile manufacturing plant where the Maryland Steamer was produced as well as a post card factory.

With Luke's growth came citizens' concerns about educational and social issues. Schooling in private homes and business buildings was relocated to a two-room schoolhouse. Growing enrollment in the first through eighth grades brought about construction of a fine new school that opened in September, 1913. It served the town well for forty-six years, sending well educated students off to Bruce High School in Westernport. When the school closed in 1959, the building was converted for use as the town's administrative offices—the City Building.

Luke is home to the Luke Paper Company, previously the Westvaco Corporation and West Virginia Pulp and Paper Mill. The mill has over a 200 million dollar economic impact on the local economy and supports the coal and rail industry as well as the trucking industry, all part of the Town of Luke's overall partnership with the mill to help the community grow. Luke is located along the Potomac River basin at the foot of Backbone Mountain and is home to the largest private employer in Allegany County.

The U.S. Environmental Protection Agency listed the paper plant as one of the largest polluters of mercury in Maryland. In 2007, the paper plant voluntarily installed $30 million worth of pollution control equipment to reduce mercury releases. Mercury is a potent neurotoxin.

In January 2015, Verso Corporation completed acquisition of NewPage, which had previously owned the Luke Paper Company.

There were 33 households, of which 15.2% had children under the age of 18 living with them, 39.4% were married couples living together, 12.1% had a female householder with no husband present, 3.0% had a male householder with no wife present, and 45.5% were non-families. 39.4% of all households were made up of individuals, and 27.3% had someone living alone who was 65 years of age or older. The average household size was 1.88 and the average family size was 2.44. 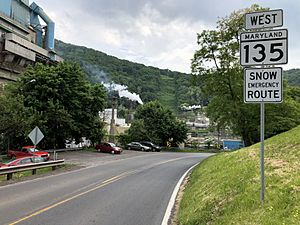 The primary means of travel to and from Luke are by road. The only state highway serving the town is Pratt Street (Maryland Route 135), which heads eastward to U.S. Route 220 by way of Westernport, and westward to U.S. Route 219 by way of Oakland. A bridge across the North Branch Potomac River connects MD 135 to West Virginia Route 46.

All content from Kiddle encyclopedia articles (including the article images and facts) can be freely used under Attribution-ShareAlike license, unless stated otherwise. Cite this article:
Luke, Maryland Facts for Kids. Kiddle Encyclopedia.