Piedmont is a town in Mineral County, West Virginia, United States. It is part of the Cumberland, MD-WV metropolitan statistical area. The population was 876 at the 2010 census. Piedmont was chartered in 1856 and the town is the subject of Colored People: A Memoir by Piedmont native Henry Louis Gates Jr.

As its name suggests, Piedmont is located at the base of a mountain, in this instance the foot of the Allegheny Front, the eastern edge of the Allegheny Mountains or Appalachian Plateau, on the south (West Virginia) side of the North Branch of the Potomac River.

The original main line of the Baltimore and Ohio (B&O) Railroad reached the site of Piedmont on July 21, 1851, and in 1853 connected Baltimore, Maryland, and the Ohio River at Wheeling, then (like Piedmont) in Virginia, and now in West Virginia. The line through Piedmont is still a major segment of the B&O system, now part of CSX Transportation.

The Town of Piedmont was chartered in 1856. During the American Civil War (1861-1865), the town of Piedmont was frequently raided by the McNeill's Rangers in an effort by the Confederates to disrupt B&O train service. In 1888, William Luke established the West Virginia Paper Company (now NewPage Corporation) on 50 acres (20 ha) of Maryland land known as West Piedmont (now Luke, Maryland, adjacent to the larger town of Westernport, Maryland).

Jazz great Don Redman was born in Piedmont on July 29, 1900. Henry Louis Gates, a professor of African-American history at Harvard University, was raised in Piedmont, an experience he described in his 1994 book Colored People.

There were 385 households, of which 33.8% had children under the age of 18 living with them, 29.9% were married couples living together, 21.8% had a female householder with no husband present, 6.8% had a male householder with no wife present, and 41.6% were non-families. 36.9% of all households were made up of individuals, and 16.6% had someone living alone who was 65 years of age or older. The average household size was 2.28 and the average family size was 2.91.

The climate in this area has mild differences between highs and lows, and there is adequate rainfall year-round. According to the Köppen Climate Classification system, Piedmont has a marine west coast climate, abbreviated "Cfb" on climate maps. 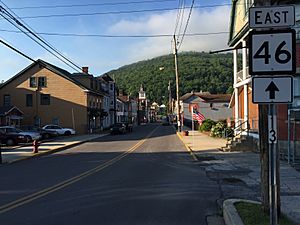 The only significant highway directly serving Piedmont is West Virginia Route 46. Route 46 continues west across the North Branch Potomac River into Westernport, Maryland. To the east, Route 46 heads to Keyser, where it has a junction with U.S. Route 220.

All content from Kiddle encyclopedia articles (including the article images and facts) can be freely used under Attribution-ShareAlike license, unless stated otherwise. Cite this article:
Piedmont, West Virginia Facts for Kids. Kiddle Encyclopedia.