Barton is a town in Allegany County, Maryland, United States, located along the Georges Creek Valley. It is part of the Cumberland, MD-WV Metropolitan Statistical Area. The population was 457 at the 2010 census.

The Reverend William Shaw, a Methodist minister settled on the site of Barton in 1794. His son, William Shaw Jr. laid out the town in 1853, naming it for his father's hometown, Barton-upon-Humber, England.

The discovery of coal in the area attracted more settlers. They came from Scotland, Ireland and Germany, eager to work in the mines. In 1853, the first shipment of coal was made on the newly built Georges Creek Railroad. Eventually, all the deep coal mines had been abandoned and replaced by strip mines, several of which are still in operation and can be seen from the town. Today, most families in Barton are supported by other types of employment.

The first gristmill powered by a water wheel was built on Moores Run by Henry Ingram. It was about 200 to 300 ft. from the confluence of Georges Creek. The mill at Moores Run was owned and tended by Mathias Ball. Ball also owned and ran a tannery at Butcher Run in Barton. The second gristmill was built at Mill Run south of Barton, it was called the Morrison Mill, and was owned by John Morrison. The Morrison Mill was located where Mill Run flows into Georges Creek. John Haymaker also tended the Hockenberry Mill before Hockenberry took over. The third mill was the Shaw Mill, built by the Shaw family. It was a large mill built of stone at Moscow. It was torn down in the summer or fall of 1961.

The Barton Coal Company plane (or cable railway) was built in 1854 and was engineered by O.D. Robbins. It remained in operation until March 21, 1898. The next week the tract, cables and mining equipment were removed. Along with the major mines, there were also many small family-owned mines on the family farms, which catered to the local coal trade.

The Pickell Mine was located on the west side of Barton towards Moscow. Its tipple was not located in town.

The Cumberland and Pennsylvania Railroad, successor to the Georges Creek Railroad, opened a train station in Barton in 1889. The station was demolished in the mid-20th century.

Today Barton has four churches and many volunteer groups. There is a lighted ball field, a playground, and two parks for use by citizens. Barton has survived floods and fires and still maintains its peaceful and congenial atmosphere. Each year the town celebrates itself with a Party in the Park. That get-together showcases crafts, food, entertainment, and a parade through the center of town.

Shaw Mansion was listed on the National Register of Historic Places in 1985.

According to the United States Census Bureau, the town has a total area of 0.22 square miles (0.57 km2), all of it land.

There were 195 households, of which 28.7% had children under the age of 18 living with them, 50.8% were married couples living together, 11.8% had a female householder with no husband present, 5.1% had a male householder with no wife present, and 32.3% were non-families. 27.7% of all households were made up of individuals, and 10.8% had someone living alone who was 65 years of age or older. The average household size was 2.34 and the average family size was 2.83. 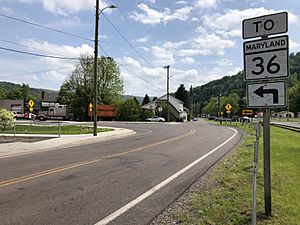 MD 935 through the middle of Barton

The primary means of travel to and from Barton is by road. The only state highway directly serving the town is Maryland Route 935, which mostly follows Legislative Road through the middle of town. MD 935 is the old alignment of Maryland Route 36, which now traverses a bypass on the town's east side. Both ends of MD 935 connect to MD 36, which extends northward to Frostburg and Interstate 68, and heads southward to Westernport.

All content from Kiddle encyclopedia articles (including the article images and facts) can be freely used under Attribution-ShareAlike license, unless stated otherwise. Cite this article:
Barton, Maryland Facts for Kids. Kiddle Encyclopedia.