Barton-upon-Humber or Barton is a town and civil parish in North Lincolnshire, England. The population at the 2011 census was 11,066. It is situated on the south bank of the Humber Estuary at the southern end of the Humber Bridge. It is 46 miles (74 km) east of Leeds, 6 miles (10 km) south-west of Hull and 31 miles (50 km) north north-east of the county town of Lincoln. Other nearby towns include Scunthorpe to the south-west and Grimsby to the south-east.

The Barton – Cleethorpes Branch Line (opened 1849) via Grimsby terminates at Barton-on-Humber railway station. The A15 passes to the west of the town cutting through Beacon Hill, and has a junction with the A1077 Ferriby Road to South Ferriby. The B1218 passes north-south through the town, and leads to Barton Waterside. Kimberly-Clark had a factory on Falkland Way close to the railway, known the Barton Plant; this area is known as the Humber Bridge Industrial Estate.

St Peter's Church has a Saxon tower. An Anglo-Saxon inhumation cemetery at Castledyke South, in use from the late 5th or early 6th century until the late 7th century, was investigated and partially excavated 1975–90: the skeletal remains of 227 individuals were identified, including one who had undergone (and survived) trepanning. The church was reopened in May 2007 as a resource for medical research into the development of diseases, and ossuary, containing the bones and skeletons of some 2,750 people whose remains were removed between 1978 and 1984 from the 1,000-year-old burial site, after the Church of England made the church redundant in 1972. The significance of the human remains lies in their representing the pathology of an isolated community over the period ca. 950-ca. 1850. An excavation report on one of England's most extensively investigated parish church, including a volume on the human remains, was published in 2007.

A ferry to Hull began in 1351, being granted by Edward II running until 1851, but this was superseded by a ferry at New Holland which began in 1820. 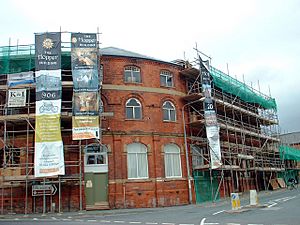 In 1880 Frank Hopper started a bicycle repair business in a former blacksmith's shop in the town. He soon began manufacturing bicycles, and after buying the Elswick Cycle Company of Elswick, Northumberland in 1910, and developed the renamed Elswick Hopper into a major manufacturer. Listed on the London Stock Exchange from 1930, the company had expanded into a diverse engineering, manufacturing and distribution conglomerate by the late 1970s. After moving residual UK bicycle manufacture to Brigg in the late 1980s, the now renamed Falcon Cycles division was sold to investors in the early 1990s. Elswick plc itself was sold in 1994, at which point it closed its offices in the town. The former head office at the junction of Brigg Road and Holydyke was converted into flats in 2006.

There are two churches in Barton-upon-Humber, St Peter's and St Mary's, located only about 170 yards apart. St Peter's is a large, mostly Anglo-Saxon church and predates St Mary's — which may have originated as a chapel on the original market place, enlarged and increasing in importance as the town's trade thrived in the 12th and 13th centuries.

Baysgarth School, is a comprehensive school for ages 11–18 on Barrow Road. There are also three primary schools, St Peter's Church of England, on Marsh Lane; the Castledyke Primary School,(formerly Barton County School) on the B1218, and Bowmandale Primary School, in the south of the town.

Barton Grammar School, which opened in 1931, used to be on Caistor Road. Henry Treece, the poet and author, was a teacher at the grammar school.

Not long after the closure of the Kimberly Clark plant Wren Kitchens bought the site and moved to a new head office, 'The Nest', on the site. Wren Kitchens are one of the biggest employers in the area.

All content from Kiddle encyclopedia articles (including the article images and facts) can be freely used under Attribution-ShareAlike license, unless stated otherwise. Cite this article:
Barton-upon-Humber Facts for Kids. Kiddle Encyclopedia.