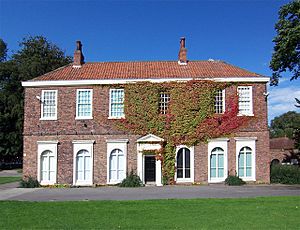 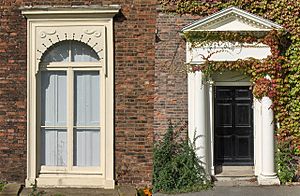 Detail of a ground floor window and the front doorway.

The museum is mainly staffed by volunteers who are responsible for opening the museum to the public, running exhibitions and assisting in collections care.

Baysgarth House is a Grade II listed building, believed to date from c. 1731. The building is built on an L-plan, with 2 storeys and an attic in red brick with a hipped pantiled roof. The building has an adjacent grade II listed stable building, believed to date from the early 19th Century, and an adjacent cottage believed to have been built for servants. Also attached to the property are the grade II* listed gate piers in an 18th-century style, topped by a lion and a unicorn. The two lodges in the wall date from the 19th Century.

The main building houses Georgian and Victorian style rooms. The museum covers the lives of local people. There is a large collection of 18th and 19th century pottery and porcelain. There is also an Industrial Museum in the old stable block. Traditional crafts such as blacksmithing, cobbing, and thatching are displayed in the Craft Cottage.

The museum is mainly staffed by volunteers who are responsible for opening the museum to the public, running exhibitions and assisting in collections care.

The History of the House

The first known owner of Baysgarth House is Thomas Glentham. From 1930, it was in public ownership, until 2004 when the Community Heritage Arts and Media Project (Champ Ltd) took over the management of the house, including its additional buildings, museum, collections, and archives.

One of the best known families to have resided in Baysgarth House is the Nelthorpes, who owned the house between 1620 and 1792. Following the Nelthorpe’s ownership the house changed hands frequently. In 1889 it was sold to Robert Wright Taylor, whose family grew up in it throughout the pre-war period. The heir of the house, Lieut. George Robert Marmaduke Stanbury Taylor, was killed in a gas attack while serving with the Royal Field Artillery at Passchendaele in World War I. The house was therefore inherited by his sister Clare Ermyntrude Magdalen Wight Ramsden (née Taylor) who, being married and settled in Norfolk, gave the house to the Public in 1930.

After the house was gifted to Barton Urban District Council it saw a range of uses. In 1940 an ARP Officer was stationed in the house. Following the war it became part of the Barton Grammar School, with the School Chair still present in the Parlour. Council Offices were located in Baysgarth from 1960– 1997, with a museum opening in the building in 1981. This museum was taken on by CHAMP in 2004 after the council closed the building.

All content from Kiddle encyclopedia articles (including the article images and facts) can be freely used under Attribution-ShareAlike license, unless stated otherwise. Cite this article:
Baysgarth House Museum Facts for Kids. Kiddle Encyclopedia.