Morgan County is a county located in the U.S. state of West Virginia. As of the 2010 census, the population was 17,541. Its county seat is Berkeley Springs. The county was formed in 1820 from parts of Hampshire and Berkeley Counties and named in honor of General Daniel Morgan, prominent soldier of the American Revolutionary War.

Morgan County is the home of an important silica mine, part of U.S. Silica.

Morgan County was created by an act of the Virginia General Assembly in March 1820 from parts of Berkeley and Hampshire counties. It was named in honor of General Daniel Morgan (1736–1802). He was born in Hunterdon County, New Jersey, and moved to Winchester, Virginia as a youth. He served as a wagoner in Braddock's Army during the campaign against the Native Americans in 1755. During the campaign, a British Lieutenant became angry with him and hit him with the flat of his sword. Morgan punched the Lieutenant, knocking him unconscious. Morgan was court-martialed for striking a British officer and was sentenced to 500 lashes. Morgan later joked that the drummer who counted out the lashes miscounted and he received only 499 lashes. For the rest of his life he claimed the British still owed him one.

The first English settlers in present-day Morgan County arrived during the 1730s. Because most of these early pioneers were squatters, there is no record of their names. Historians claim that the first cabin in the county was built around 1745. As word of the county's warm springs spread eastward, Thomas Fairfax, 6th Lord Fairfax of Cameron decided that the county needed to be surveyed. In 1748, George Washington, then just 16 years old, was part of the survey party the surveyed the Eastern Panhandle region for Lord Fairfax. He later returned to Bath (Berkeley Springs) several times over the next several years with his half-brother, Lawrence, who was ill and hoped that the warm springs might improve his health. The springs, and their rumored medicinal benefits, attracted numerous Indians as well as Europeans to the area.

As mentioned previously, George Washington visited present-day Berkeley Springs several times with his half-brother, Lawrence. When he vacationed in the area in 1767, he noted how busy the town had become. Lord Fairfax had built a summer home there and a "private bath" making the area a popular destination for Virginia's social elite. As the town continued to grow, the Virginia General Assembly decided to formally recognize it. In October 1776, the town was officially named Bath, in honor of England's spa city called Bath. The town's main north-south street was named Washington and the main east-west street was named Fairfax. Also, seven acres (28,000 m²) were set aside for "suffering humanity." When West Virginia gained statehood, that area became West Virginia's first state park.

Bath's population increased during and immediately after the American Revolutionary War as wounded soldiers and others came to the area believing that the warm springs had medicinal qualities. Bath gained a reputation as a somewhat wild town where eating, drinking, dancing, and gambling on the daily horse races were the order of the day.

Bath later became known as Berkeley Springs, primarily because the town's post office took that name (combining Governor Norborne Berkeley's last name with the warm springs found there) to avoid confusion with another post office, located in southeastern Virginia, which was already called Bath. Because the mail was sent to and from Berkeley Springs, that name slowly took precedence. 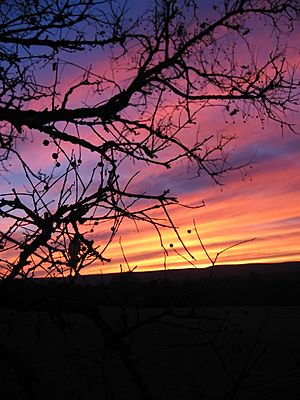 The following are listed on the National Register of Historic Places:

All content from Kiddle encyclopedia articles (including the article images and facts) can be freely used under Attribution-ShareAlike license, unless stated otherwise. Cite this article:
Morgan County, West Virginia Facts for Kids. Kiddle Encyclopedia.