Cherry Run is a small unincorporated community hamlet located along the CSX Transportation (formerly Baltimore and Ohio Railroad) mainline on the Potomac River in Morgan County in the U.S. state of West Virginia. The community is named for the stream, Cherry Run, that meets the Potomac in its vicinity. It was originally known as Cherry Run Depot because of the important interchange between the B&O and the Western Maryland Railway located there.

The last remnant of the interchange was Miller Tower, an interlocking tower controlling the junction. The tower was closed in September 2000, disassembled, and moved to the Martinsburg Shops site in February 2001. It was eventually reassembled there in November 2005.

Across the Potomac from Cherry Run lies Big Pool on the Chesapeake and Ohio Canal. 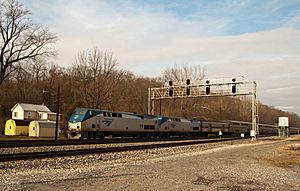 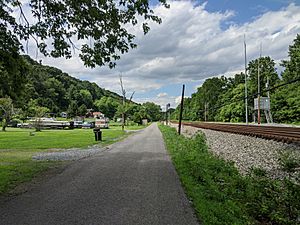 Chessie Lane along the B&O Mainline in Cherry Run

All content from Kiddle encyclopedia articles (including the article images and facts) can be freely used under Attribution-ShareAlike license, unless stated otherwise. Cite this article:
Cherry Run, West Virginia Facts for Kids. Kiddle Encyclopedia.