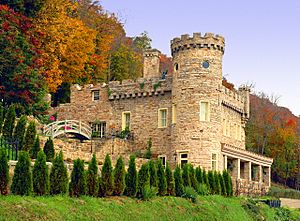 The Samuel Taylor Suit Cottage overlooks the town and often is referred to as the "Berkeley Castle"; note the fall colors characteristic of the Appalachian mountains 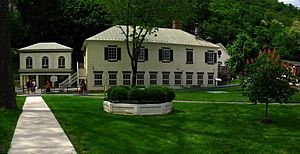 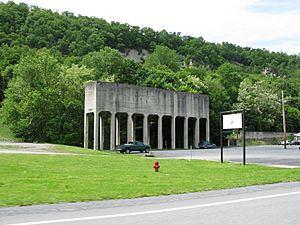 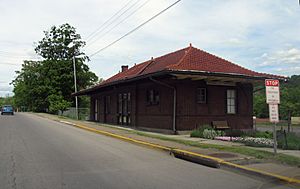 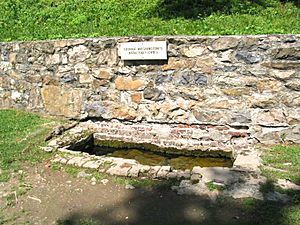 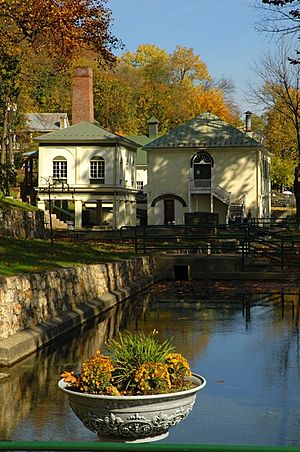 Another view of part of Berkeley Springs State Park, with fall colors 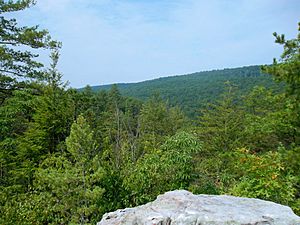 Berkeley Springs is a town in, and the county seat of, Morgan County, West Virginia, USA, in the state's Eastern Panhandle. While the area was part of Virginia (prior to 1861), the town was incorporated as Bath. Since 1802, it has been referred to by the name of its original Virginia post office, Berkeley Springs. The population of the town was 624 at the 2010 United States Census. The town is located within the Hagerstown-Martinsburg, MD-WV Metropolitan Statistical Area. Berkeley Springs is a sister city to Bath, Somerset, England.

The area contains mineral water springs that were frequented by Native Americans indigenous to the area, possibly for thousands of years. After settlement by Europeans, the mineral springs drew many visitors from urban areas. Notable colonial visitors to the area included George Washington and James Rumsey. Berkeley Springs remained a popular resort area during the early years of the United States. It is the home of the Berkeley Springs International Water Tasting, the longest running and largest such event in the world.

The area continues to be a popular resort area with tourism the main industry in the county and four full-service spas using the mineral water. A historic building whose construction began in 1888, was built as a retreat for Rosa and Samuel Taylor Suit, and it overlooks the town (see photograph). It often is called "Berkeley Castle".

Berkeley Springs is a noted arts community with working artists accounting for approximately 1% of the county population of 16,000. Since 1994, the town has been listed in all four editions of John Villani's "100 Best Art Towns in America" (one of only 11 towns so rated).

During colonial times in 1748, George Washington, then just 16 years old, was part of the team that surveyed the Eastern Panhandle region for Thomas Fairfax, 6th Lord Fairfax of Cameron. Washington returned several times over the next several years with his half-brother, Lawrence, who was ill, in hopes that the warm springs might improve his health. The springs, and their rumored medicinal benefits, attracted numerous Aboriginal Americans as well as Europeans to the area.

While vacationing in the area in 1767, Washington made note of how busy the colonial town had become. Lord Fairfax had built a summer home there and a "private bath" making the area a popular destination for Virginia's social elite. With the advent of independence, An act for establishing a town at the Warm Springs in the county of Berkeley was adopted by the Virginia General Assembly in December 1776. Officially, the town was named Bath, in honor of England's spa city of Bath. George Washington, his family members and several of the colonial elite were among the town's first landowners. The town's main north-south street was named Washington and the main east-west street was named Fairfax. Also, four acres were set aside for "suffering humanity." The area around the springs always was public land known as The Grove and overseen by a state-appointed group of Berkeley Springs trustees. This would become a historic park with its springs and bathhouses, which was made part of the West Virginia state park system in 1925. Nearby, Cacapon State Park was opened in 1933. The mountain that gives its name to the park has an elevation of 2,320 feet (710 m) above sea level.

Bath's population increased during and immediately after, the Revolutionary War as wounded soldiers and others came to the area believing that the warm springs had medicinal qualities. Bath gained a reputation then as a somewhat wild town where eating, drinking, dancing, and gambling on the daily horse races were the order of the day.

In 1772, the springs were part of the newly formed Berkeley County, named after its colonial governor, Norborne Berkeley. The waters became known as Berkeley Springs because the existing protocol was to name springs after the colonial Virginia county in which they were located. Previously, the area had been called Warm Springs and Medicinal Springs among other names.

Bath became known permanently to the world as Berkeley Springs in 1802 when the Virginia postal system was established in the new nation and there already was a Bath, Virginia, in Bath County.

West Virginia became a state following the Wheeling Conventions of 1861, in which 50 northwestern counties of Virginia decided to break away from Virginia during the American Civil War. The new state was admitted to the Union on June 20, 1863. Berkeley Springs remained the conventional name used for the town. Its Sister City is Bath, England.

According to the United States Census Bureau, the incorporated town of Bath has a total area of 0.34 square miles (0.88 km2), all land.

There are two rivers in Morgan County. The Potomac makes up the northern border and the Cacapon River cuts through the center of the county connecting with the Potomac at Great Cacapon. The Cacapon and Sleepy Creek Mountains are the two most notable mountains in the county. Berkeley Springs is nestled in the extreme northern Shenandoah Valley at an elevation of approximately 499 feet. Warm Spring Run cuts through the center of the town and eventually, connects with the Potomac River near the Hancock Station. Sleepy Creek connects with the Potomac along River Road north and east of the town.

Berkeley Springs experiences a wide array of various weather conditions. There are four distinct seasons in the area. The summers usually are warm, but occasionally can be hot. The fall is variable, and winter is very unpredictable. Temperatures in winter may vary from -4 degrees Fahrenheit to the lower 70s (rare). In recent years the area has had approximately 15-25 inches of snow. The spring season usually has a lot of precipitation. Recent years have been noticeably wetter than average.

Severe weather does affect the area and may be dangerous at certain times. July 18, 2006, was an example when, on a summer day that was very moist and humid, a cold front sparked storms. Berkeley Springs Emergency Management reported 2.75" hail that caused $750,000 in damage. Flash flooding caused an additional $125,000 in damage. Wind damage accounted for $13,000.

Other notable events include impacts from Hurricane Ivan, which resulted in two tornadoes, only causing minor damage. It also resulted in numerous road closures from flooding. 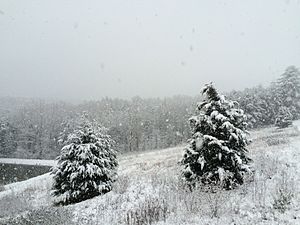 The 2009-2010 winter season was the worst for Morgan county since records have been kept. Nearly 100 inches of snow fell over the county. Best estimates for the county are approximately 90 inches. Three big snowfalls accounted for a large amount of the total snowfall for the season. 33 inches, 17 inches, and 13 inches were the top three biggest snowfalls for the year. It was the greatest accumulation since 2003, the prior year when Morgan County had a double digit snowfall accumulation. During the 09-10 season the county experienced three. The county also had its first blizzard since 1996 and that was the 13 inch storm in mid February. 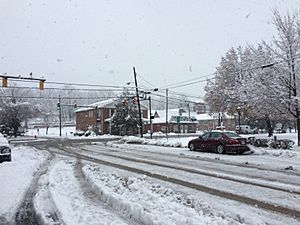 In September 2012, a storm that dropped six inches of rain in three hours caused widespread flooding in the town.

The first white thanksgiving in years occurred November 2014. Heavy snow fell on the 26th and lasted through Thanksgiving. Storm totals were 21 inches in Paw Paw, 6-7 inches near Sleepy Creek, and 11 inches 1 mile SE of Berkeley Springs. Thundersnow was also observed, which is rare in winter storms.

The warmest month is generally July (86 degrees) while the coldest is January (41 degrees).

There were 314 households of which 23.9% had children under the age of 18 living with them, 31.8% were married couples living together, 14.6% had a female householder with no husband present, 3.8% had a male householder with no wife present, and 49.7% were non-families. 43.0% of all households were made up of individuals and 17.5% had someone living alone who was 65 years of age or older. The average household size was 1.99 and the average family size was 2.74.

There were 331 households out of which 20.5% had children under the age of 18 living with them, 35.6% were married couples living together, 10.0% had a female householder with no husband present, and 51.4% were non-families. 46.5% of all households were made up of individuals and 25.1% had someone living alone who was 65 years of age or older. The average household size was 1.98 and the average family size was 2.85.

All content from Kiddle encyclopedia articles (including the article images and facts) can be freely used under Attribution-ShareAlike license, unless stated otherwise. Cite this article:
Berkeley Springs, West Virginia Facts for Kids. Kiddle Encyclopedia.