Hancock is a town in Washington County, Maryland, United States. The population was 1,546 at the 2010 census. The Western Maryland community is notable for being located at the narrowest part of the state. The north-south distance from the Pennsylvania state line to the West Virginia state line is only 1.8 miles (2.9 km) at Hancock. 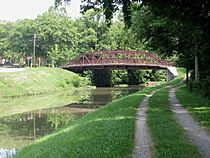 The state of Maryland narrows to a width of less than two miles in the Hancock area—the smallest non-vertex border-to-border distance of any U.S. state. It is at the junction of Interstates 68 and 70.

The climate in this area is characterized by hot, humid summers and generally mild to cool winters. According to the Köppen Climate Classification system, Hancock has a humid subtropical climate, abbreviated "Cfa" on climate maps.

There were 694 households, of which 28.5% had children under the age of 18 living with them, 37.6% were married couples living together, 15.1% had a female householder with no husband present, 5.9% had a male householder with no wife present, and 41.4% were non-families. 36.7% of all households were made up of individuals, and 14.3% had someone living alone who was 65 years of age or older. The average household size was 2.23 and the average family size was 2.86. 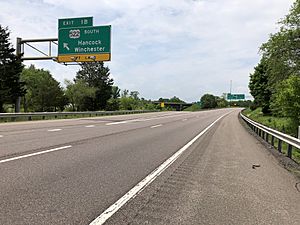 The primary means of travel to and from Hancock are by road. Interstate 70 is the main highway serving the town. I-70 continues east to Baltimore and west to the southern suburbs of Pittsburgh. U.S. Route 40 runs concurrently with I-70 through the town, but just to the northwest, splits with I-70 to follow Interstate 68 westward towards Cumberland. U.S. Route 522 also traverses Hancock, heading northwest with I-70 into Pennsylvania and southward into eastern West Virginia towards Winchester, Virginia. Within the town, Maryland Route 144 serves as a local service route, following Main Street.

All content from Kiddle encyclopedia articles (including the article images and facts) can be freely used under Attribution-ShareAlike license, unless stated otherwise. Cite this article:
Hancock, Maryland Facts for Kids. Kiddle Encyclopedia.