Frederick County is located in the Commonwealth of Virginia. As of the 2010 census, the population was 78,305. Its county seat is Winchester. The county was formed in 1743 by the splitting of Orange County. It is Virginia's northernmost county. Frederick County is included in the Winchester, VA-WV Metropolitan Statistical Area, which is also included in the Washington-Baltimore-Northern Virginia, DC-MD-VA-WV-PA Combined Statistical Area.

The area that would become Frederick County, Virginia was inhabited and transited by various indigenous peoples for thousands of years before European colonization. The "Indian Road" refers to a historic pathway made by local tribes.

Frederick County was established in 1743 from parts of Orange County. (At that time, "Old Frederick County" encompassed all or part of four counties in present-day Virginia — Shenandoah, Clarke, Warren, and Frederick — and five in present-day West Virginia — Hardy, Hampshire, Berkeley, Jefferson and Morgan.) The Virginia Assembly named the new county for Frederick Louis, Prince of Wales (1707–1751), the eldest son of King George II of Great Britain.

As Commander-in-Chief of the new Colonial Virginia regiment in 1754, Colonel George Washington's headquarters were located in Winchester before and during the French and Indian War. He resigned from military service in 1758; only to be appointed General by the Continental Congress sixteen years later. Meanwhile, Washington represented Frederick County in his first elective office, having been elected to the House of Burgesses in 1758 and 1761. Daniel Morgan was another famous General during the American Revolutionary War, from (present day Clarke County).

Winchester changed hands between the Confederate and Union Armies on average once every three weeks during the war. Many battles were fought in Frederick County. Some of those battles include:

The first constitution of West Virginia provided for Frederick County to be added to the new state if approved by a local election. Unlike those of neighboring Berkeley and Jefferson counties, Frederick County residents voted to remain in Virginia despite being occupied by the Union Army at the time. 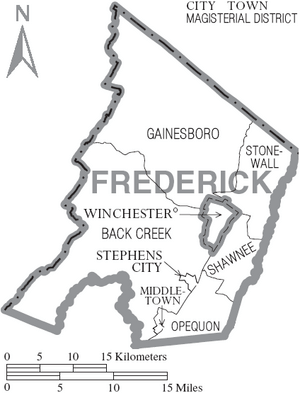 Despite being the county seat, Winchester, like all cities under Virginia law, is an independent city—politically independent of any county.

All content from Kiddle encyclopedia articles (including the article images and facts) can be freely used under Attribution-ShareAlike license, unless stated otherwise. Cite this article:
Frederick County, Virginia Facts for Kids. Kiddle Encyclopedia.