Apple Pie Ridge Road runs 8.8 miles along the key local terrain feature, which is the Apple Pie Ridge located between the city of Winchester and the West Virginia border, starting at U.S. 522 beside James Wood High School. The road passes the Upper Ridge Quaker Cemetery, then continues past Hiatt's Hill and Hiatt Road, where Edward Braddock led a march of British forces past this area on the way to capture Fort Duquesne near Pittsburgh, Pennsylvania. 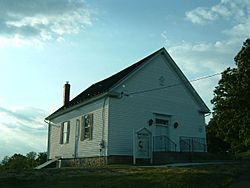 The history of this community goes back to 1751, when the road was simply known as Ridge Road by an order of the court. As Quaker families settled in this area, migrating southward "up" the Great Appalachian Valley, orchards, wheat farms and cattle farms sprang up around the area. The road supposedly became known as Apple Pie Ridge Road when Hessian soldiers, captured during the American Revolutionary War, were quartered on the Glaize farm west of Winchester, Virginia, and would walk north to the ridge to eat apple pies cooked by Quakers.

In Varle's 1809 map of Frederick County the Apple Pie Ridge Road is shown with its new name, and many subsequent maps distinctly mark the White Hall intersection as a landmark. The Quaker meeting in this community was named the Hopewell Meeting, which was the name of three Quaker meetings in the local area, along Apple Pie Ridge and at Pugh's town (Gainesboro, Virginia) as well as on Crooked Run (east of Stephens City). Several historical schools stood along this road, including the Lower Ridge Quaker School, Ridge School, Barrett School, the White Hall School and two private schools in White Hall, including Lodge School.

The White Hall community played a role in the various American Civil War battles surrounding Winchester, and wounded soldiers were treated in the White Hall United Methodist Church. Union forces were completely routed twice in two major defeats which sent disintegrated Union units fleeing to the north and west of Winchester through this area, particularly after the Second Battle of Winchester, when roads to Martinsburg, West Virginia were cut off by advancing Confederate troops on their way to Gettysburg, Pennsylvania in June 1863. Many partisan and Virginia Militia cavalry forces were sourced and operated in this area as part of the Confederate strategy to threaten and sever the Baltimore and Ohio Railroad, the Chesapeake and Ohio Canal and accompanying roads and telegraph lines north of here. Throughout the war, the White Hall community helped the Confederate States Army through provision of fodder, wheat, and cattle.

Today new housing communities have sprung up near White Hall along Apple Pie Ridge, and are interspersed with old cattle farms and apple orchards with some farm houses still standing from the mid-18th century. The White Hall community offers scenic views of Green Spring and Frog Hollow in the foothills of the North Mountain to the west, as well as views of the greater Shenandoah Valley to the east.

The Old Stone Church was listed on the National Register of Historic Places in 2001.

All content from Kiddle encyclopedia articles (including the article images and facts) can be freely used under Attribution-ShareAlike license, unless stated otherwise. Cite this article:
White Hall, Frederick County, Virginia Facts for Kids. Kiddle Encyclopedia.