Stephens City ( STEE-vənz) is an incorporated town in the southern part of Frederick County, Virginia, United States, with a population of 1,829 at the time of the 2010 Census. In 2014, it was estimated that the population of Stephens City had risen to 1,921.

Founded by Peter Stephens in the 1730s, the colonial town was chartered and named for Lewis Stephens in October 1758. It was originally settled by German Protestants from Heidelberg. Stephens City is the second-oldest municipality in the Shenandoah Valley after nearby Winchester, which is about 5 miles (8 km) to the north. "Crossroads", the first free black community in the Valley in the pre-Civil War years, was founded east of town in the 1850s. Crossroads remained until the beginning of the Civil War when the freed blacks either escaped or were recaptured. Stephens City was saved from intentional burning in 1864 by Union Major Joseph K. Stearns. The town has gone through several name changes in its history, starting as Stephensburg, then Newtown, and finally winding up as Stephens City, though it nearly became Pantops. Interstate 81 and U.S. Route 11 pass close to and through the town, respectively.

A large section of the center of the town, including buildings and homes, covering 65 acres (26 ha), is part of the Newtown-Stephensburg Historic District and was listed on the National Register of Historic Places in 1992. Stephens City celebrated its 250th anniversary on October 12, 2008. The town is a part of the Winchester, Virginia-West Virginia Metropolitan Statistical Area, an offshoot of the Washington–Baltimore–Northern Virginia, DC–MD–VA–WV Combined Statistical Area. It is a member of the Winchester–Frederick County Metropolitan Planning Organization.

Jost Hite, a German immigrant, purchased a large land grant in the northern Shenandoah Valley in 1731. Peter Stephens and a small party of German Protestants from Heidelberg, in the Palatinate, arrived about 1732 to buy and settle that land, including the site of what became Stephens City, named for the Stephens family. Although Hite's title to the land was challenged by Thomas Fairfax, 6th Lord Fairfax of Cameron, the land baron of the area, the matter was settled amicably.

Town lots were laid out beginning in 1754, and on September 21, 1758, Lewis Stephens petitioned the colonial government of Virginia in Williamsburg for a town charter. The Virginia General Assembly approved the charter for the town of "Stephensburgh" on October 12, 1758. The mostly German-speaking residents soon left off the "h"; the town was usually spelled "Stephensburg". By the start of the Revolutionary War, Stephensburg was often called simply "New Town" or "Newtown", as the new settlement on the Great Wagon Road south of Winchester.

Shenandoah Valley and Newtown's central location attracted heavy traffic through the region, and wagon-making emerged as an important industry for the town; Newtown artisans supplied wagons throughout the state. By 1830, the town's population had reached 800. In the late 1850s, free blacks began a settlement about a mile east of town which became known as Crossroads or Freetown, which lasted until the time of the American Civil War. After the January 1, 1863, Emancipation Proclamation, most of the newly freed slaves and many of the already free blacks left the area.

When the American Civil War broke out in 1861, the majority of Newtown's young men joined Confederate forces. During the war, the town was "between the lines", nominally controlled by the Union but with much Confederate partisan activity. On May 24, 1862, Stonewall Jackson's Confederate forces advanced northward on the Valley Pike and attacked Union troops. At Newtown, General George Henry Gordon of the Second Massachusetts Infantry ordered his Federal troops to make a stand. The skirmishing involved heavy artillery fire, but Gordon's men retreated without loss of the important supply wagons. When Gordon left the town to Jackson's forces, both sides claimed a victory. 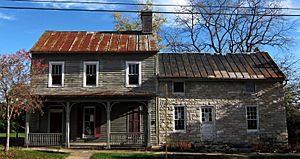 The Stone House, along Main Street in Stephens City, built in the late 1700s.

In June 1864, Major Joseph K. Stearns of the 1st New York Cavalry arrived under orders to burn the town down to help stop Confederate ambushes on the wagon road. Because the remaining population mostly consisted of women, children and the elderly, Stearns allowed the town to stand. He required the adult residents to take the "Ironclad oath", in which they swore that they had not voluntarily provided aid to the Confederacy. The government required the oath, effectively excluding ex-Confederates from the political arena during Reconstruction Era.

In April 1867, the Virginia General Assembly granted a charter to the Winchester and Strasburg Railroad Company. The company was authorized to construct a rail line between Winchester and Strasburg, linking Newtown to the rest of the nation by railroad for the first time. Though the railroad improved the local economy, which had lagged after the end of the war, it decimated the wagon-building trade. In 1880, the United States Post Office Department, faced with nearly a dozen Newtowns in Virginia, announced that the local post office would be renamed Pantops. Dissatisfied with the name, the townsfolk chose "Stephens City". 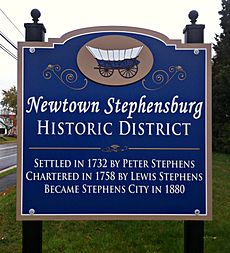 The 20th century brought improvements to energy and domestic systems: electrical service was introduced in 1915; and in 1941, just before World War II, the town installed a water system. The construction of Interstate 81 (I-81) during the early 1960s depressed business development in the town. The wagon road, which had been made part of U.S. Route 11, had led traffic through the center of town, but the interstate passed less than a tenth of a mile to the east, drawing off development, retail trade and ultimately, businesses. This caused downtown to decline. Developers constructed new residential subdivisions both within and outside the town boundaries to the east for access to I-81.

The town surveyed its older buildings to establish architectural significance and to determine those that contributed to the town's historic center. The Newtown-Stephensburg Historic District was listed on the National Register of Historic Places in August 1992. Renovation of the town center has attracted heritage tourism. Anticipating more growth, the town annexed 360 acres (1.5 km2) of unincorporated Frederick County in 2005, another 100 acres (0.4 km2) in 2006, and 175 acres (0.7 km2) in 2007. The town celebrated its 250th anniversary on October 12, 2008.

Virginia school systems had practiced resistance following the United States Supreme Court ruling in Brown v. Board of Education (1954) that segregated public schools were unconstitutional. The United States District Court for the Western District of Virginia ordered Frederick County schools desegregated (including those serving Stephens City) in Brown v. County School Board (1964). In 1994, Virgil E. Watson was elected as the first African American to serve on the Stephens City Town Council. Watson served for one term from 1994 until 1998.

On September 17, 2004, remnants of Hurricane Ivan spawned an F1 tornado that touched down just south of the town along Interstate 81. It caused approximately $1 million in damage and injured two people. It was one of a record 40 tornadoes to hit northern Virginia that day.

The town is located between the Blue Ridge Mountains and the Appalachian Mountains in the northern Shenandoah Valley of Virginia in close proximity to West Virginia, Maryland, and Pennsylvania. Washington, D.C., is approximately 65.9 miles (106.1 km) to the east and Baltimore is 84 miles (135 km) to the northeast.

Stephens City is located in the humid subtropical climate zone (Köppen climate classification: Cfa), exhibiting four distinct seasons. Its climate is typical of Mid-Atlantic U.S. areas removed from bodies of water. The town is located in plant hardiness zone 7 throughout the town and surrounding Frederick County, indicating a temperate climate. Spring and fall are warm, with low humidity, while winter is cool, with annual snowfall averaging 15.0 inches (38 cm). Average winter lows tend to be around 30 °F (−1 °C) from mid-December to mid-February. Blizzards affect Stephens City on average once every four to six years. The most violent nor'easters typically feature high winds, heavy rains, and occasional snow. These storms often affect large sections of the U.S. East Coast.

View of Newtown Commons, located along Main Street (US 11) in Stephens City

Just outside Stephens City is Sherando Park. The park houses several trails, ponds, a pool, sports fields and more. Sherando Park is also home of the Virginia Tech Memorial Garden, planted in memory of the 2007 Virginia Tech massacre, which took place approximately 175 miles (282 km) from the park. It has "a winding sidewalk shaped in the college's trademark 'VT'" and "a flagpole surrounded by 32 Hokie Stones", one for each of the 32 victims of the shooting. The Memorial Garden was dedicated and opened on April 16, 2009, the second anniversary of the shooting. The park was built by the Shenandoah Chapter of Virginia Tech Alumni Association, which is based in nearby Winchester, Virginia.

The Family Drive-In Theatre, a two-screen drive-in theater, is located near the town, on U.S. Route 11 just south of Stephens City. It is one of ten drive-ins in the state of Virginia. The theatre converted to all-digital in 2013. Stephens City plays host to the annual "Newtown Heritage Festival" held each Memorial Day weekend. The three-day event features many crafts, carnival-style food, a tractor wagon ride through town, local music at Newtown Commons, a parade on Saturday and fireworks.

Stephens City is one of the towns along the Route 11 Yard Crawl. A yearly event held during the second Saturday in August, the Yard Crawl is an almost 50-mile-long (80 km) yard sale that stretches from Stephens City's Newtown Commons south along U.S. Route 11 to New Market, Virginia. The event is sponsored by the Shenandoah County Chamber Advisory Group, five chambers of commerce, and the town of Stephens City.

Plans are in place to move State Route 277 to near The Family Drive-In Theatre, 0.50 miles (0.80 km) south of its current western terminus with US Route 11 with the eastern terminus remaining at its current location. The planned construction will also move the I-81 interchange at Stephens City, where there are a number of service stations and fast food restaurants, south of the town limits to alleviate congestion on the current Route 277 bridge, which will remain after construction is completed. Planners expect expansion of Stephens City to the south. 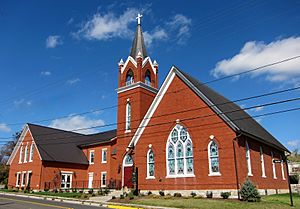 The oldest surviving church building in the town is Orrick Chapel, built between 1866 and 1869 as the home of an African Methodist Episcopal congregation. Missionaries from this first independent black denomination came South after the war to aid freedmen and plant new congregations; they attracted hundreds of thousands of new members. This church replaced an earlier Methodist chapel constructed in the late 1850s; it was razed by Union troops during the winter months of 1864–1865 near the end of the Civil War.

As of 2010, within the town limits are congregations of the Evangelical Lutheran Church in America and United Methodist Church as well as those of the Baptist, Mennonite, Pentecostal, Charismatic Episcopal and Full Gospel denominations of Christianity. Just south of the town limits is a Unitarian Universalist church. A Roman Catholic parish affiliated with the Diocese of Arlington and a Jewish synagogue, which each function as centers for their respective members in the entire Shenandoah Valley, are located approximately 5 miles (8.0 km) north in Winchester.

All content from Kiddle encyclopedia articles (including the article images and facts) can be freely used under Attribution-ShareAlike license, unless stated otherwise. Cite this article:
Stephens City, Virginia Facts for Kids. Kiddle Encyclopedia.