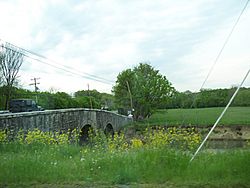 Opequon Creek is a 64.4-mile-long (103.6 km) tributary stream of the Potomac River. It flows into the Potomac northeast of Martinsburg in Berkeley County, West Virginia, and its source lies northwest of the community of Opequon at the foot of Great North Mountain in Frederick County, Virginia. The Opequon forms part of the boundary between Frederick and Clarke counties in Virginia and also partially forms the boundary between Berkeley and Jefferson counties in West Virginia's Eastern Panhandle.

Opequon is a name derived from an unidentified local Native American language.

Streams are listed from south (headwaters) to the north (mouth).

The Opequon Creek is home to many species of Crayfish and Minnow. Many species of turtles also inhabit the creek, most notably the Eastern box turtle. Snakes are very common, with Copperheads and Garter snakes being the most numerous. Many species of mammals live near the creek's water, the biggest being the White-tailed deer. Plants types that live along the creek include grasses, water lilies, and aquatic plants. Sycamore trees, Tulip Trees, and Willow trees dig their roots along the creeks banks.

Due to water runoff during rainfall, the water flow of the Opequon Creek varies. In the spring, the creek's output of water is very high due to wet conditions during spring. In the summer, the water flow is usually normal, with Thunderstorms raising the water, and short-term droughts lowering the water. In the fall, the water level is usually below-normal due to dry conditions and lower rainfall. During the winter however, the creek is usually at its highest because of low evaporation caused by cold temperatures and thick cloud covers. The creek rarely freezes over, but sometimes stagnant water will freeze through.

All content from Kiddle encyclopedia articles (including the article images and facts) can be freely used under Attribution-ShareAlike license, unless stated otherwise. Cite this article:
Opequon Creek Facts for Kids. Kiddle Encyclopedia.