New Market is a town in Shenandoah County, Virginia, United States. Founded as a small crossroads trading town in the Shenandoah Valley, it has a population of 2,146 as of the most recent 2010 U.S. census. The north–south U.S. 11 and the east–west U.S. 211 pass near it and cross Massanutten Mountain at the town's titular gap. 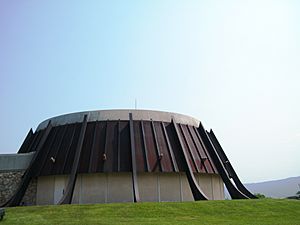 In 1745, John Sevier, later a Revolutionary War commander and first governor of the State of Franklin and first Governor of Tennessee, was born in the town.

On Friday, June 13, 1862, New Market was the site of a skirmish in the American Civil War between a small Union Army and a small Confederate Army.

On May 15, 1864, New Market was the site of the Battle of New Market - a battle in the Valley Campaigns of 1864 in the American Civil War. Students from the Virginia Military Institute fought alongside the Confederate Army and forced Union General Franz Sigel and his army out of the Shenandoah Valley. Every year VMI cadets commemorate the 85-mile march from Lexington to New Market done by the cadets in 1864 which ended in their victorious charge at the Battle of New Market.

According to the United States Census Bureau, the town has a total area of 2.0 square miles (5.2 km²), all land.

The climate in this area is characterized by hot, humid summers and generally mild to cool winters. According to the Köppen Climate Classification system, New Market has a humid subtropical climate, abbreviated "Cfa" on climate maps. 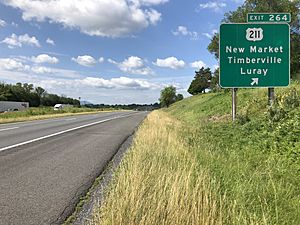 View south along I-81 at the exit for New Market

The main highway providing access to New Market is Interstate 81. Within the town limits, I-81 has a junction with U.S. Route 211 and Virginia State Route 211, which head east to Luray and west to Timberville, respectively. U.S. Route 11 also passes through New Market, serving as a local service road to I-81.

All content from Kiddle encyclopedia articles (including the article images and facts) can be freely used under Attribution-ShareAlike license, unless stated otherwise. Cite this article:
New Market, Virginia Facts for Kids. Kiddle Encyclopedia.