Brucetown is an unincorporated community in northern Frederick County, Virginia, United States. Brucetown lies at the intersection of Brucetown and Sir John Roads. A post office was established in the community in 1819. Brucetown also had its own school in operation from 1871 to 1941.

Brucetown was named for the Bruce family, some of the earliest Europeans that settled there. Sir John Robert Bruce, I came to the area between 1731 and 1737, and built a grist and sawmill that established the village. John Bruce (son of Thomas Bruce and Mary Christian Bruce of Scotland) was christened in the Church of Scotland (Presbyterian) on Sept. 7th, 1690. In Aberdeen Scotland, three of John's children were also christened in Scotland: James Bruce on May 20th, 1720, George Bruce on April 27th, 1722 and Margaret Bruce on March 5th, 1727. He willed 150 acres each to his sons George and James. His son George Bruce continued the operation of the mill in Brucetown, Virginia and also operated a tavern. This became known as Bruce's Mills and later, Brucetown. 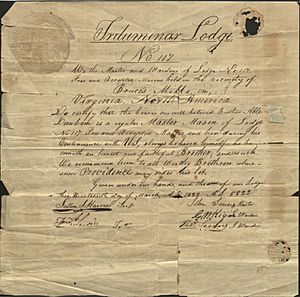 Freemason Trilumniar Lodge No. 117 was first located in Brucetown, Virginia

All content from Kiddle encyclopedia articles (including the article images and facts) can be freely used under Attribution-ShareAlike license, unless stated otherwise. Cite this article:
Brucetown, Virginia Facts for Kids. Kiddle Encyclopedia.