Boswell is a borough in Somerset County, Pennsylvania, United States. It is part of the Johnstown, Pennsylvania Metropolitan Statistical Area. The population was 1,364 at the 2000 census.

There were 608 households out of which 28.1% had children under the age of 18 living with them, 41.9% were married couples living together, 13.8% had a female householder with no husband present, and 39.1% were non-families. 35.2% of all households were made up of individuals and 17.9% had someone living alone who was 65 years of age or older. The average household size was 2.24 and the average family size was 2.92. 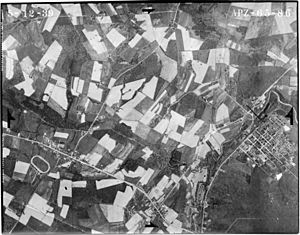 Aerial view of Boswell and vicinity, May 12, 1939. Photograph was taken six weeks after the mine closed permanently. Note the coal tipple just outside the town, which was dismantled in 1940.

Boswell was settled in 1901 and incorporated as a borough on February 22, 1904. The community's founder was Thomas Taylor Boswell, the first president and supervisor of the Merchants Coal Company. Mr. Boswell's company purchased 14,000 acres (57 km2) of mineral rights under local farmland and laid out 1,600 lots for coal company houses to house the miners for its new deep coal mine just to the north. Merchants Coal, and the related Orenda Coal, were subsidiaries of Hillman Coal and Coke Company of Pittsburgh, the same firm that built the neighboring town of Jerome, Pennsylvania. 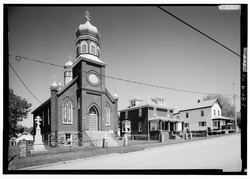 Houses and a church on Quemahoning Street

Merchants Coal attempted to build Boswell to be a notch above surrounding coal company towns in that plans included a central business district, a high school, and homes constructed from brick, as opposed to the wood used elsewhere. This also helped to prevent the spread of fire, in the event that one would break out. Many of the original brick homes are still standing, with much of their original integrity. A branch of the Baltimore & Ohio railroad served Boswell and its coal mine. At its economic peak shortly after World War II, Boswell boasted two movie theatres, three department stores, a bank, several jewelry stores, a druggist, two funeral homes, three grocery stores, nearly a dozen restaurants and taverns, a lumber yard, and a weekly newspaper. Earlier, pre-Prohibition, Boswell also boasted its own brewery.

Boswell's streets generally run perpendicular to its avenues, in a grid. Many of the avenues in Boswell are named after coal company officials. For example:

At the same time, the borough's street names can provide a geography lesson, following the flow of water from Boswell to the seas, with two exceptions made for streets in the central business district. Street names from north to south are: Quemahoning, Stonycreek, Center (in place of "Conemaugh" for the Conemaugh River), Main (in place of "Kiskiminetas" for the Kiskiminetas River), Allegheny, Ohio, Mississippi, Mexico (for the Gulf of Mexico), Atlantic and Pacific.

The mine, Orenda Mine #1, extracted high quality, semi-bituminous coal. A steam engine hoisted the coal to the surface. The hoist pulled the coal cars up a coal tipple that was 1,080 feet (330 m) long, 92 feet (28 m) high, and 60 feet (18 m) wide. In 1920, this was the largest coal tipple in the world. At its prime, 900 men were employed and over 3,000 tons of coal were mined daily. The company was eventually renamed to the United Coal Company and in 1918 it became the Davis Coal Company.

For most of its history, the mine at Boswell operated without union representation. An early attempt to unionize workers led to an armed riot on January 17, 1904. Seven were wounded and 20 arrested in the melee. A prolonged struggle for unionization, which began at Jerome and Windber in northern Somerset County in early April, 1922, extended to Boswell on April 17. By April 24, 1922, miners at Acosta, Gray, Ralphton, Randolph and Jenners also joined the strike, which was to last sixteen months. (For a more detailed discussion of the strike, see the wiki for Jerome, Pennsylvania.) 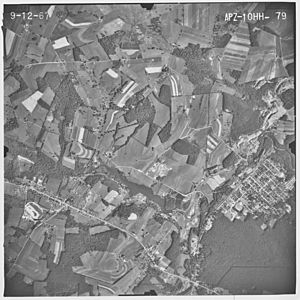 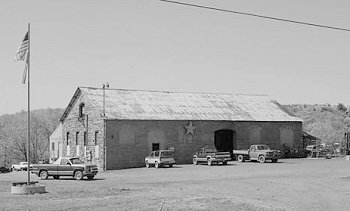 There have been two noteworthy disasters at the Boswell mines. A methane gas explosion killed five miners in 1909 and another explosion in 1915 killed 22 miners.

Mining at Boswell was a problem-plagued effort, according to discussions with local residents from the era. While much archival research remains to be done corroborate these details, it seems apparent that Merchants Coal, and its parent which was eventually known as Hillman Coal & Coke, miscalculated in the siting of Boswell and its mine. Given the size of Merchant's capital outlay—including construction in Boswell of the world's largest tipple, a central business district and a high school—the company planned big things for Boswell. The town of Jerome appears to have been built as a satellite town, soon to be linked with Boswell, both underground in coal production and on the surface in social and cultural life (the right-of-way for a street car line was acquired between Jerome and Boswell, for instance). However, local miners tell of the "Stone Wall," an unexpected and virtually insurmountable underground geological fault hit midway between Jerome and Boswell that prevented the linking of the two mines at a reasonable cost. Evidence of this fault can be seen on the land surface near Route 601 about two miles (3 km) south of Jerome. (Indeed, when mechanized deep-mining resumed in this area for a time in the late 20th century, the entry shaft was sunk adjacent to this fault, presumably so access could be had to the entire field.) It can be speculated that Hillman had planned to use Boswell as its primary processing facility after the link-up, thus the huge tipple. Hillman also likely planned to make Boswell the center of operations and community life (of evidence, the high school). But the two mines never came together; in fact, Boswell's mine proved to be significantly less productive than Jerome's, as shown by documented production figures from 1927, for example. In that year, Boswell produced 204,592 tons of coal, while Jerome produced 816,568 tons, four times as much.

The Boswell mine closed on March 29, 1939, due to the excessive cost of transporting coal to the surface (the Jerome mine worked until 1954). The Boswell tipple was dismantled in 1940, though some of the tipple's abutments still stand today. After the mine closed a slow economic decline set in. However, many businesses survived well into the 1960s and early 1970s. Railroad freight service to Boswell stopped in the early 1970s. Boswell today is primarily a bedroom community.

In 1970, the high school was rechristened as North Star High School. It is the successor from the earlier Boswell, Jenner Boswell, Jenner-Boswell-Jennerstown, and Forbes High Schools. The high school is approaching its centenary and currently serves the two surrounding townships (Jenner and Quemahoning) and three boroughs (Jennerstown, Stoystown and Hooversville) in addition to Boswell residents.

Orenda Park,[1] a community forest and picnic area, has been established at the site of the former coal tipple. The park is maintained by the Boswell Area Historical Society. The Boswell Historic District was added to the National Register of Historic Places in 1994.

Drainage from the Boswell mine was a primary source of pollution into Quemahoning Creek, which flows just north of Boswell. A remediation project was completed in 2005, spearheaded by SCRIP (Stonycreek-Conemaugh River Improvement Project), a non-governmental organization, in collaboration with OSM, the Pennsylvania Department of Environmental Protection, the Southern Alleghenies Conservancy, Somerset County Conservation District and Reliant Energy. In addition, the Jenner Rod & Gun Club, a local sportsmen's club, provided significant funds to purchase property for the remediation site.

The most recent information showed the system is treating between 1,600 and 2,000 gallons of water per minute, removing approximately 80 tons of iron a day from the water. About 3,000 trout were stocked successfully into a four-mile (6 km) section of the Creek downstream from Boswell in 2005, the first time the creek supported a fishery along this stretch in almost 100 years.

All content from Kiddle encyclopedia articles (including the article images and facts) can be freely used under Attribution-ShareAlike license, unless stated otherwise. Cite this article:
Boswell, Pennsylvania Facts for Kids. Kiddle Encyclopedia.