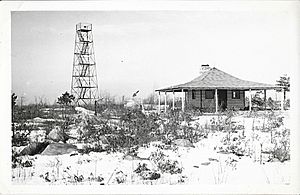 Mount Davis (3,213 ft or 979 m) is the highest point in Pennsylvania. Located in the 5,685-acre (2,301 ha) Forbes State Forest near the hamlet of Markleton in Elk Lick Township, Somerset County; it lies on a gentle crest of a 30-mile (50 km) ridge line extending from central Somerset County southward into Garrett County, Maryland known as Negro Mountain.

The high point was named for John Nelson Davis, an early settler, American Civil War veteran, surveyor, and naturalist known for his studies of the mountain's flora and fauna. During the Civil War, Davis served in Company E, 102nd Pennsylvania Infantry.

The summit of Mt. Davis may be ascended by car or a number of hiking trails. Its surroundings are noted for their patterns of unusual circular stone formed by periglacial action. A metal observation tower with a relief map of the region stands near the true high point. Mount Davis ranks 33rd on the list of highest natural points in each U.S. state.

In addition to the observation tower, a cabin once stood at the top of Mount Davis as seen in the photo below (circa 1939). The summit is identified by the arrow in the picture.

Trails in the park include:

Climate on the peak is warm in the summer, and cold in the winter. Like much of Pennsylvania, Mount Davis can experience heavy winds, rain, and hail in the summer, with ice storms and blizzards in the winter. Temperature extremes range from −33 to 84 °F (−36 to 29 °C), though frosts have been recorded in every month of the year. Summer conditions are generally mild and winters are characterized by a lot of snowfall. Average annual precipitation ranges from 38 to 42 inches (970 to 1,070 mm).

Mount Davis has a humid continental climate that is affected by the high elevation significantly enough that the area feels slightly more like a cooler version of the climate zone during the winter months. Due to its high elevation, the area is colder much of the winter than Altoona, Johnstown, or State College, despite being well south of those locations. During the summer months, the area is a retreat for other Pennsylvanians with high temperatures being cooler on average than Pittsburgh and eastern portions of the state. Mount Davis recorded many impressive record lows and is quite close to the state's all-time coldest temperature.

All content from Kiddle encyclopedia articles (including the article images and facts) can be freely used under Attribution-ShareAlike license, unless stated otherwise. Cite this article:
Mount Davis (Pennsylvania) Facts for Kids. Kiddle Encyclopedia.