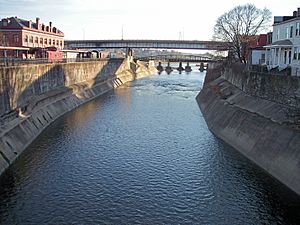 Wills Creek near its mouth in Cumberland in 2007

Wills Creek is a 38.6-mile-long (62.1 km) tributary of the North Branch Potomac River in Pennsylvania and Maryland in the United States. 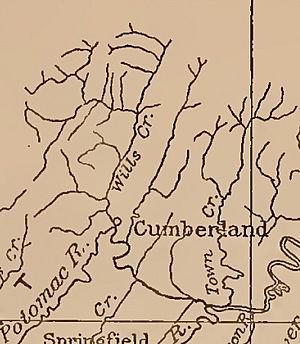 Wills Creek and Town Creek Watersheds in Pennsylvania and Maryland 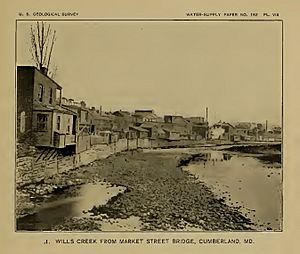 Wills Creek was named after Will's Town, a former settlement of the Shawnee Indians at the site of Cumberland, Maryland. After the Shawnee deserted this region, an Indian named Will lived a short distance from the site of the old Shawnee town at the mouth of Caiuctucuc Cr. At the time of the coming of the first white settlers he was living in a cabin on the mountain side. The creek, mountain, and town were afterward named for him. "Will's creek" is noted on the maps of Lewis Evans (1755) and Scull (1759, 1770), and on the map in Christopher Gist's journal. (See Hodge, 1912)

In the early twentieth century, pollution from industrial waste and household sewage was a problem, since many businesses and homes dumped their waste directly into Wills Creek in the urban area of Cumberland.

In the 1950s, the city of Cumberland and the United States Army Corps of Engineers embarked upon an $18.5 million flood-control program along a stretch of Wills Creek bordering the city. The project was one of the most costly public works projects in the city's history. Disastrous floods from Wills Creek had ravaged Cumberland, particularly in 1924, 1936, and 1942, and the Army Corps of Engineers designed a system that would prevent property damage caused by the high waters. It began just upstream from the bridge at U.S. Route 40, where the corps paved the bottom of Wills Creek, constructing concrete walls along its banks, and with the building of a sophisticated pumping system to prevent the watershed from flooding during heavy rain. The work took a decade to complete and was finished in 1959. It has successfully prevented flooding ever since.