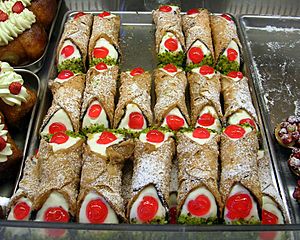 Cannoli on display topped with cherries and pistachios

Cannoli ( Sicilian: cannola) are Italian pastries consisting of tube-shaped shells of fried pastry dough, filled with a sweet, creamy filling usually containing ricotta—a staple of Sicilian cuisine. They range in size from 9 centimetres (3.5 in) to 20 centimetres (7.9 in). In mainland Italy, they are commonly known as cannoli siciliani (Sicilian cannoli).

In English, cannoli is usually used as a singular, but in Italian, it is grammatically plural; the corresponding singular is cannolo ( Sicilian: cannolu), a diminutive meaning 'little tube', from canna, 'cane' or 'tube'. This form is uncommon in English.

Some food historians place the origins of cannoli in 827–1091 AD in Caltanissetta, by the concubines of princes looking to capture their attention.

Author Gaetano Basile merged this legend with other historical traditions to determine that cannoli come from the Palermo and Messina areas and were historically prepared as a treat during Carnival season, possibly as a fertility symbol. The dessert eventually became a year-round staple in Sicily.

Some similar desserts in Middle Eastern tradition include "Zaynab's fingers" (أصابع زينب), which are filled with nuts, and qanawāt (قنوات), deep-fried dough tubes filled with various sweets, which were a popular pastry across the ancient Islamic world. The dish and the name may originate from the Muslim Emirate of Sicily. The minne di Sant'Agata or minni di virgini, cheese filled half spheres with icing and fruit in honour of St Agatha. Feddi dû cancillieri ("chancellor's slices") are similar cream and apricot jam filled almond cookies.

All content from Kiddle encyclopedia articles (including the article images and facts) can be freely used under Attribution-ShareAlike license, unless stated otherwise. Cite this article:
Cannoli Facts for Kids. Kiddle Encyclopedia.