Detroit-style pizza is a rectangular pizza with a thick crust that is crispy and chewy. It is traditionally topped with tomato sauce and Wisconsin brick cheese that goes all the way to the edges. This style of pizza is often baked in rectangular steel trays designed for use as automotive drip pans or to hold small industrial parts in factories. The style was developed during the mid-twentieth century in Detroit before spreading to other parts of the United States in the 2010s. The dish is one of Detroit's iconic local foods.

Pizza in a traditional-style pan

The pizza was developed in 1946 at Buddy's Rendezvous, a former blind pig owned by Gus and Anna Guerra located at the corner of Six Mile Road and Conant Street in Detroit. Sources disagree whether the original Sicilian-style recipe was based on Anna Guerra's mother's recipe for sfincione or a recipe from one of the restaurant's employees, Connie Piccinato. The recipe created a "focaccia-like crust" with pepperoni pressed into the dough to "maximize the flavor penetration". The restaurant baked it in blue steel pans available from local automotive suppliers, made in the 1930s and 1940s by Dover Parkersburg and used as drip trays or to hold small parts or scrap metal in automobile factories because baking pans available at the time were not appropriate for the dish. Some 50- to 75-year-old pans are still in use.

The restaurant later was renamed Buddy's Pizza. In 1953, the Guerras sold it and opened the Cloverleaf in Eastpointe, Michigan. Former Buddy's employee Louis Tourtois made pizzas at Shield's before founding Loui's Pizza in Hazel Park, Michigan. The Detroit News called Tourtois the "king of pizzas" in 1978. National chain Jet's, local chain Shield's, and Luigi's the Original of Harrison Township are other locally-notable restaurants serving the style.

Buddy's Pizza chief brand officer Wesley Pikula, who started at Buddy's as a busboy in the 1980s, said that he had never heard the term "Detroit-style" before the 1980s when a trade magazine used it and that even afterward it was seldom used except in national trade articles. As late as 2007, some local media were referring to the style as "Sicilian-style". Some makers of Detroit-style pizza in other areas questioned whether to call their pizza by that name, as "sometimes people have negative thoughts about Detroit." 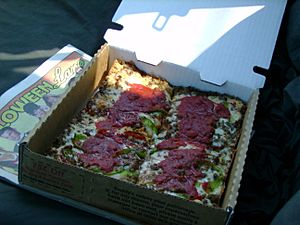 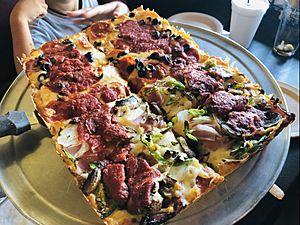 Example of Detroit-style pizza with "racing stripe" sauce placed on top of the toppings.

In 2012, local restaurant cook Shawn Randazzo won the Las Vegas International Pizza Expo world championship with a Detroit-style pizza, and according to pizza educator Tony Gemignani, the reaction was immediate. "After he won, I must have had six phone calls from operators, from guys who are big in the industry, saying, 'Give me a recipe for Detroit. How do I figure this out?'" Randazzo started a training and certification program to teach others in the industry to make "authentic Detroit-style" pizza. By 2018, he had trained 36 restaurateurs from the U.S., Thailand, and South Korea. By 2019 a restaurant in Canberra, Australia was serving the style. By 2019, the San Francisco Bay Area also experienced interest and growth. Montreal, Canada has a restaurant that began serving the style in 2020, describing that Detroit-style pizza is “everything we love about pizza, a long dough fermentation mixed with a combination of soft, chewy, and crunchy textures." According to Serious Eats, "in early 2016 or so, everyone seemed to be talking about it or writing about it or opening up restaurants devoted to it." Trade journal Pizza Today wrote in 2018 that "Perhaps no pizza style has entered the public consciousness in quite the way that Detroit-style pan pizza has." They credited Randazzo's International Pizza Expo win with "rock(ing) the pizza world". Trade journal Restaurant Hospitality said the style had become popular on Instagram.

In 2019, Esquire called the style "one of the hottest food trends across America", and both the Detroit Free Press and Eater said Detroit-style pizza was "having its moment". Eater wrote that pizzerias offering the style were spreading across the US, but that the new pizzas were different:

On one side are the local Detroit pizzerias and restaurants devoted to their normcore, family-restaurant roots with toppings directly on the crust, a layer of processed brick cheese, and sauce on top. Then there are the "artisanal" square pizzas, with their aged doughs, organic toppings, unprocessed cheeses, and "frico" crust. These designer square slices are sometimes baked in a wood-fired oven and often served on Instagrammable metal trays in perfect lighting — a departure from the checkered tablecloths, no-frills boat drinks, and generous displays of bocce ball plaques at Buddy's. And in this new era of Detroit-style pizza, it's this photogenic version that many Americans are discovering first.

Detroit-style pizza showing sauce on top of some of the toppings, lacy cheese crust, and cheese to the edge

Eater said the artisanal trend was slow to catch on in Detroit. Along with the Coney Island hot dog and the Boston cooler, the traditional Detroit-style is one of Detroit's iconic local foods.

Frozen Detroit-style pizza products with positive reviews are available from takeout providers and food producers. One positive review with three tasters featured compliments about the "thick, fluffy, chewy crust". Pizzerias who traditionally have not sold online have started to sell frozen products through nationwide online marketplaces.

In 2021, after about one year of development and 500 iterations, Pizza Hut released four versions of its Detroit-style pizza. Reviews from The Washington Post and Uproxx mention that while the trademark elements of Detroit-style pizza are represented, there were some shortcomings that resulted in a negative experience. The Takeout provided a positive review overall, though it also had some negative feedback about the sauce. Social media reactions have been strong and Deadline Detroit reported many negative reactions. Delish provided positive reviews and mentioned that people who like thick, crunchy crust and sweeter sauce will like the Pizza Hut version. 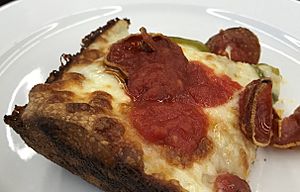 Detroit-style pizza is a deep-dish rectangular pizza topped with Wisconsin brick cheese and a cooked tomato-based sauce. The dough typically has a hydration level of 70 percent or higher, which creates an open, porous, chewy crust with a crisp exterior. The fresh dough is double-proofed and stretched by hand to the pan corners. When seasoning new steel pans, they usually need to be dry-baked using 10 to 18 ounces of dough per pan. Randazzo says that the crust should be about 1.5 inches thick for true Detroit-style pizza. The buttery flavor of the crust results from a small quantity of oil and the melting properties of the mozzarella and Wisconsin brick cheeses. Shield's Pizza describes the importance of the sauce for flavor and how quality is ensured by consistently baking pizza for 13 minutes at 440°F. Loui's Pizza places the pepperoni first, underneath almost one pound of brick cheese and then bakes the pizza at 700°F. The brick cheese can withstand the heat due to the heavy butterfat content.

Traditionally the toppings are layered with the cheese below the sauce. Pepperoni is often placed directly on the crust, and other toppings may go directly on top of the cheese with the cooked sauce as the final layer, applied in dollops or in "racing stripes," two or three lines of sauce. Some recipes call for the sauce to be added after the pizza comes out of the oven. The style is sometimes referred to as "red top" because the sauce is the final topping. 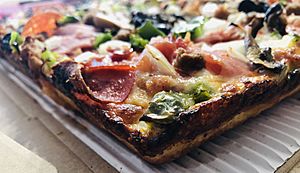 The cheese is spread to the edges and caramelizes against the high-sided heavyweight rectangular pan, giving the crust a lacy, crispy edge. This edge, known as frico, is the crispy caramelized cheese that runs along the edges of Detroit-style pizzas. According to the trade journal Pizza Today, "The key to this pizza is the delicious caramelized cheese that melts down the interior walls of the pan". 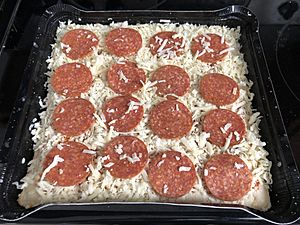 Example of frozen Detroit-style pizza from a grocery store

All content from Kiddle encyclopedia articles (including the article images and facts) can be freely used under Attribution-ShareAlike license, unless stated otherwise. Cite this article:
Detroit-style pizza Facts for Kids. Kiddle Encyclopedia.