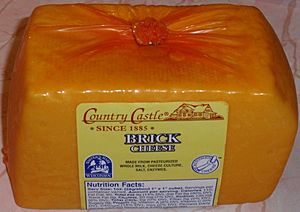 A package of brick cheese

Brick cheese is a cheese from Wisconsin, U.S., made in brick-shaped form. The color ranges from pale yellow to white, and the cheese has a sweet and mild flavor when young, and matures into a strong, ripe cheese with age. It is a medium-soft cheese.

Brick cheese was originally produced in Wisconsin beginning in 1877.. The cheese-making process was derived from white American Cheddar that is cultured at a slightly higher temperature, which results in a marginally higher fat content and a slightly altered protein structure. The resultant "brick cheese" has a slightly softer texture.

Brick cheese is made in the form of a large rectangular or brick shape, but may also be named "brick" because the cheese curds are pressed with clay-fired bricks.

The cheese is placed on wooden shelves, then gets washed with a whey and water mixture and turned. After several days the cheese is then packaged.

The US Code of Food Regulations defines what the fat and moisture content of brick cheese must be. This Standard of Identity does not take into account that brick cheese should be surface ripened with B. linens.

Brick is an American cheese, made in rectangular loaves, that was first produced in Wisconsin in 1877 by John Jossi, a cheese maker of Swiss descent. The loaf-shaped cheese displays numerous fine holes when it is sliced. When young, it is sweet and mild; after aging, it tastes somewhat like a mild Limburger or cheddar, and has been compared to a Danish Tilsit.

Corynebacterium and Arthrobacter are the necessary bacterial genera for smear cheese ripening. Brevicacterium linens, while present in many smear cultures, is not typical.

Brick cheese is the traditional cheese for Detroit-style pizza.

All content from Kiddle encyclopedia articles (including the article images and facts) can be freely used under Attribution-ShareAlike license, unless stated otherwise. Cite this article:
Brick cheese Facts for Kids. Kiddle Encyclopedia.