Callisto is a moon of the planet Jupiter, discovered in 1610 by Galileo Galilei. It is the second largest moon orbiting Jupiter, after Ganymede, and the third largest moon in the Solar System. Callisto is almost the same size as the planet Mercury. Of the four Galilean moons of Jupiter, Callisto is the farthest out. Like the Earth's Moon, Callisto rotates synchronously with its orbital period. This means that one side is always turned toward Jupiter, while the other side never sees the face of the planet. Callisto's surface is less affected by Jupiter's magnetosphere than the seven moons nearer the planet. 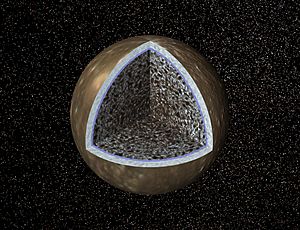 Callisto has about equal amounts of rock and ices. Compounds on the surface include water ice, carbon dioxide, silicates, and organics. The Galileo spacecraft made investigations of the moon, and revealed that Callisto may have a small silicate core and possibly a subsurface ocean of liquid water more than 100 kilometers deep.

Notable surface features include multi-ring structures, impact craters in different shapes, and chains of craters (known as catenae) and associated scarps, ridges and deposits. On a smaller scale, the surface is varied. It is made up of frost on hill tops, surrounded by a smooth blanket of dark material in valleys. 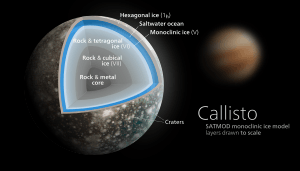 Callisto's battered surface lies on top of a cold, stiff, and icy lithosphere that is between 80 and 150 km thick. A salty ocean 150–200 km deep may lie beneath the crust.

Callisto is surrounded by an extremely thin atmosphere made out of carbon dioxide and probably oxygen molecules. There is also a rather intense ionosphere. An ocean is thought to exist within Callisto. This may mean that life might exist. However, this is less likely than on nearby Europa. Various space probes from Pioneers 10–11 to Galileo and Cassini−Huygens have studied the moon. Callisto is considered the most suitable place for humans to settle for future exploration of the Jovian system.

Callisto is the outermost of the four Galilean moons of Jupiter. One orbit around Jupiter is equal to 16.7 days on Earth.

The isolation of Callisto from Jupiter means that it has never been tidally heated, which has important consequences for its internal structure and evolution. Its distance from Jupiter also means that the charged-particle flux from Jupiter's magnetosphere at its surface is relatively low—about 300 times lower than, for example, that at Europa. Hence, unlike the other Galilean moons, charged-particle irradiation has had a relatively minor effect on Callisto's surface. The radiation level at Callisto's surface is over ten times higher than Earth's average background radiation. 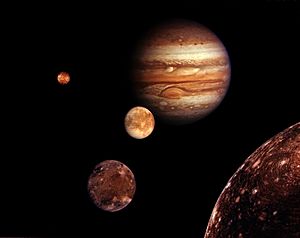 Montage of Jupiter and the Galilean satellites, Io, Europa, Ganymede, and Callisto, all photographed by Voyager 1

It is thought that there could be life in Callisto's subsurface ocean. Like Europa and Ganymede, as well as Saturn's moons Enceladus, Mimas, Dione and Titan, a possible subsurface ocean might be composed of salt water. It is possible that halophiles could thrive in the ocean. As with Europa and Ganymede, the idea has been raised that habitable conditions and even extraterrestrial microbial life may exist in the salty ocean under the Callistoan surface. However, the environmental conditions necessary for life appear to be less favorable on Callisto than on Europa. 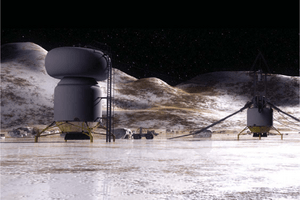 Artist's impression of a base on Callisto

In 2003 NASA conducted a conceptual study called Human Outer Planets Exploration (HOPE) regarding the future human exploration of the outer Solar System. The target chosen to consider in detail was Callisto.

The study proposed a possible surface base on Callisto that would produce rocket propellant for further exploration of the Solar System. Advantages of a base on Callisto include low radiation (due to its distance from Jupiter) and geological stability. Such a base could facilitate remote exploration of Europa, or be an ideal location for a Jovian system way-station servicing spacecraft heading farther into the outer Solar System, using a gravity assist from a close flyby of Jupiter after departing Callisto.

In December 2003, NASA reported that a manned mission to Callisto might be possible in the 2040s.

All content from Kiddle encyclopedia articles (including the article images and facts) can be freely used under Attribution-ShareAlike license, unless stated otherwise. Cite this article:
Callisto (moon) Facts for Kids. Kiddle Encyclopedia.