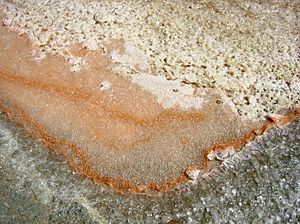 Dunaliella salina in sea salt, an example of a halophile

Halophiles are organisms that need salt in their environment to live. Halophiles live in evaporation ponds or salt lakes such as Great Salt Lake, Owens Lake, or Dead Sea. The name "halophile" comes from Greek for "salt-loving".

Most halophiles are archaeans, but some bacteria and eukaryotes are also halophiles, such as the alga Dunaliella salina.

Most halophilic and salt-eating animals use energy to remove salt from their cytoplasm. Normally, organisms living around a lot of salt would lose water and die because of osmosis. Water inside the organism would move from inside the cell to its outside environment. This is because there is always movement of water to reach a state where the concentrations of salt are the same on both sides of the cell membrane. 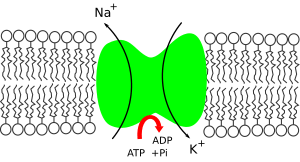 To survive, the cytoplasm of halophiles must be isotonic with its environment.

To get to this state, halophiles use two different methods. In the first (mainly used by bacteria, some archaea, yeasts, algae and fungi), organic compounds are stored in the cytoplasm. These compounds help the organism survive the stress of osmosis. The most commonly used solutes for this process are neutral and include amino acids and sugars. Advantages to this method are that organisms can live in a wider range of salt concentrations. Also, if proteins are not exposed to high salt levels, they do not have to adapt to high salt levels. It requires the organism to use much more energy then the adaption below.

The second, less common adaptation, is the selective intake of potassium (K+) ions into the cytoplasm. In exchange, the organism pumps sodium (Na+) ions out with the help of the sodium-potassium pump. Ions of sodium may be used instead of potassium, but potassium is the most common. This adaptation is only used by one order of bacteria and one family of Archaea. An advantage to this method is that it uses much less energy than the adaption above. The main disadvantage to this adaption is that all of the machinery inside the cell (enzymes, structural proteins, etc.) must be adapted to high levels of non-organic ions, and high salt levels. This is much more demanding than the adaptation described above.

Most halophilic organisms only use one of the two methods, but a few halophiles can use both. 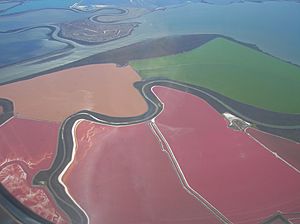 Halophile single-celled organisms color the basins of these salt-evaporation ponds. Depending on the level of salinity, different species dominate, which results in different colors.

Halophiles are useful for cleaning up polluted environments. Waste water with salt concentrations more than 2% is ideal for halophiles to remove organic pollutants from. For instance, halophiles have been shown to remove phenol (a poisonous chemical) from their environments. This could lead to future use in cleaning up oil spills.

Halophilic microorganisms are useful in biotechnology. The compounds that certain halophiles make are valuable. Some of these compounds are not found anywhere else in the living world. The salt-tolerant enzymes that halophiles produce can be used in a variety of ways. For example, these enzymes could be used for rough industrial processes, like food processing.

Some moderate halophiles produce sugars outside the cell. These sugars can be used as thickeners and emulsifiers in the petroleum and medicine industries.

All content from Kiddle encyclopedia articles (including the article images and facts) can be freely used under Attribution-ShareAlike license, unless stated otherwise. Cite this article:
Halophile Facts for Kids. Kiddle Encyclopedia.