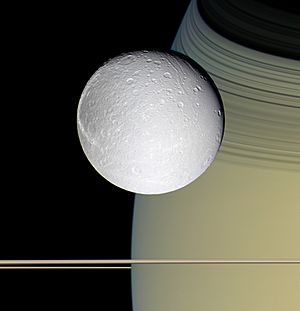 Dione in front of Saturn's rings.

Dione is the fourth largest moon of Saturn. It has a diameter of 1,123 km (698 miles). It was discovered in 1684 by Giovanni Domenico Cassini. It is named after the titan Dione in Greek mythology. The moon has many craters and ice cliffs. It is tidally locked with Saturn, meaning the same face of Dione always faces Saturn.

All content from Kiddle encyclopedia articles (including the article images and facts) can be freely used under Attribution-ShareAlike license, unless stated otherwise. Cite this article:
Dione (moon) Facts for Kids. Kiddle Encyclopedia.