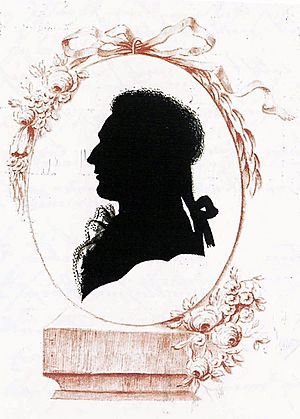 A traditional silhouette portrait of the late 18th century 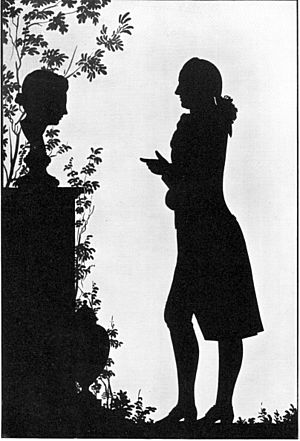 A silhouette is an image in outline only, usually filled in as black on a white background.

The inside of a silhouette is featureless.It differs from an outline. That shows the edge of an object in line form, but a silhouette is a solid shape. Silhouette images may be made in any visual artistic medium. The word was first used to describe pieces of cut paper, which were then stuck to a backing in a contrasting colour, and often framed.

Cutting portraits, generally in profile, from black card became popular in the mid-18th century. They were a cheap alternative to the portrait miniature. Skilled specialist artists could cut a high-quality bust portrait in a matter of minutes. Other artists, especially about 1790, drew an outline on paper, then painted it in, which could also be done quickly.

From its original graphic meaning, the term silhouette has been extended to describe the sight or representation of a person, object or scene that is backlit, and appears dark against a lighter background. Anything that appears this way, for example, a figure standing backlit in a doorway, may be described as "in silhouette".

All content from Kiddle encyclopedia articles (including the article images and facts) can be freely used under Attribution-ShareAlike license, unless stated otherwise. Cite this article:
Silhouette Facts for Kids. Kiddle Encyclopedia.