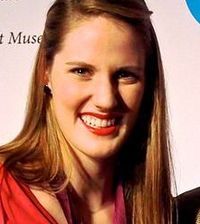 In her Olympic debut at the 2012 Summer Olympics at age 17, Franklin won a total of five medals, four of which were gold. She swept the women's backstroke events, winning gold in both the 100-meter and 200-meter backstroke. Franklin's successes have earned her Swimming World's World Swimmer of the Year and the American Swimmer of the Year award in 2012 as well as the FINA Swimmer of the Year Award in 2011 and 2012. In total, she has won twenty-seven medals in international competition: sixteen gold, six silver, and five bronze, spanning the Olympics, the World Championships, the short course World Championships, and the Pan Pacific Championships. Franklin's eleven gold medals at the World Aquatics Championships was a record in women's swimming before Katie Ledecky broke it in 2017.

All content from Kiddle encyclopedia articles (including the article images and facts) can be freely used under Attribution-ShareAlike license, unless stated otherwise. Cite this article:
Missy Franklin Facts for Kids. Kiddle Encyclopedia.