Woolaroc is located in the Osage Hills of Northeastern Oklahoma on Oklahoma State Highway 123 about 12 mi (19 km) southwest of Bartlesville, Oklahoma and 45 mi (72 km) north of Tulsa, Oklahoma. Woolaroc was established in 1925 as the ranch retreat of oilman Frank Phillips. The ranch is a 1500 hectare (3700 acre) wildlife preserve, home to many species of native and exotic wildlife, such as buffalo, elk and longhorn cattle. Woolaroc is also a world class museum with a collection of western art and artifacts, American Indian material, and one of the largest collections of Colt firearms in the world. Also on display is Woolaroc, the aircraft that won the ill-fated Dole Air Race in 1927. Woolaroc features a nature trail and a living history area inviting you to experience the natural environment of Woolaroc, the life in a pre-Civil War 1840s mountain man camp. Will Rogers once said, 'When you are visiting the beauty spots of this country, don't overlook Frank Phillips' ranch and game preserve in Bartlesville, Oklahoma. It's the most unique place in this country.' If there is one last under-discovered treasure left in the United States, it surely must be a place called Woolaroc.

The name Woolaroc is a portmanteau of the words woods, lakes, rocks, features of the beautiful Osage Hills of northeast Oklahoma where Woolaroc is located. The name was originally intended for the ranch house, but it soon became the name for the entire Frank Phillips ranch.

Woolaroc Museum is owned and operated by The Frank Phillips Foundation, Inc. that was founded in 1937 by oilman Frank Phillips and his wife Jane Phillips with the primary purpose of providing educational support for the employees of Phillips Petroleum Company (now ConocoPhillips) and their families.

The museum started out as a hangar in 1929 for the Woolaroc airplane, a place Frank Phillips sponsored in the Dole Flight from Oakland California to Honolulu, Hawaii in 1927. Over the years Frank continued to receive gifts, and made art acquisitions, and the museum grew room by room. The museum is 50,000 square feet and now has over 600 paintings, 300 bronzes, over 2,300 pieces of Native American art and artifacts, as well as many pieces of taxidermy that decorate the walls of the museum and lodge. The galleries feature some of the premier Indian and Western artists in America's history: Remington, Russell, Leigh, Moran, Couse, Johnson, Sharp, Balink, Hennings, Ufer, Berninghaus, and much more.

Woolaroc Ranch Historic District, also known as Rock Creek Game Preserve, Frank Phillips Ranch, Phillips Osage Park and Woolaroc Museum and Wildlife Preserve, was listed on the National Register of Historic Places on December 5, 2008. It is significant as a reflection of the time period and for its role in the petroleum industry of the time. It is also significant for its landscape architecture. Contributing resources include 18 buildings, 22 sites, 115 structures, and 17 objects. It was listed as a featured property of the week in a program of the National Park Service that began in July, 2008. 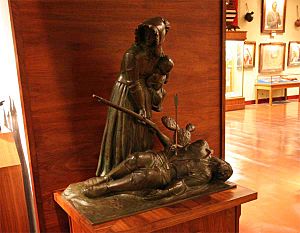 "Protective" by John Gregory: One of the twelve Pioneer Woman Models on display at Woolaroc Museum

In 1928, E. W. Marland, founder of Marland Oil Company (later to become Conoco) and at that time one of the wealthiest men in the world, commissioned twelve miniature 3-foot sculptures that were submitted by US and international sculptors as models for the Pioneer Woman statue. The commission that Marland paid each sculptor has been variously cited as $10,000 and as $2,000 for each submission. The miniatures traveled to twelve cities where they were viewed by 750,000 people who cast votes for their favorite.

The twelve submissions included "Protective" by John Gregory; "Determined" by Maurice Sterne; "Challenging" by Hermon Atkins MacNeil; "Affectionate" by James E. Fraser; "Self-Reliant" by Alexander Stirling Calder; "Fearless" by Wheeler Williams; "Heroic" by Mario Korbel; "Adventurous" by F. Lynn Jenkins; "Sturdy" by Mahonri Young and "Faithful" by Arthur Lee; "Trusting" by Jo Davidson; and "Confident" by Bryant Baker. The New York Times reported on March 27, 1927 that the exhibition had arrived in New York City and that it had attracted "more interest than any exhibition of sculpture New York has known in a long while." The twelve models were exhibited for three weeks in the Reinhardt Galleries and Bryant Baker's model was the winner of the first place in the New York balloting. The Times Reported that "Baker not only won first honors, but was the last man to enter the contest having no more than a month to prepare his model and obtain a casting." Marland pronounced himself pleased with the models. "I believe all of the sculptors have done well," said Marland. "We could select any one of the twelve figures and get an excellent interpretation of the frontier woman. the decision will be a hard one to make. I expect to be guided largely by public taste, but the final decision will be my own. This national vote is going to show exactly what the American people think about one of the greatest of their women," Marland added.

The exhibition touched a popular chord in American culture of the time. The New York Times reported on March 27, 1927 that among those who visited the exhibition at the Reinhardt Galleries was 91-year-old Betty Wollman who as a young bride had journeyed from St. Louis to Leavenworth Kansas in 1855 and had once entertained Abraham Lincoln as a dinner guest in the Wollman household in Leavenworth long before Lincoln was a candidate for President. Wollman spoke about women's role during pioneer days in the old west and congratulated Marland for his proposal to erect a statue to the Pioneer Woman. "Mr. Marland is to be congratulated for doing this in commemoration of these early women of the West," said Wollman. "The hardships were many, and the courage and self-denial of the women who worked side by side with their husbands and sons and brothers in those primitive days are largely responsible for the development of the Middle Western States, now so rich in everything that goes to make life worth living."

The winning statue nationwide was "Confident," produced by British-born American sculptor Bryant Baker. It is believed that Marland's personal favorite was "Trusting" by Jo Davidson who had also sculpted statues of Marland, his wife Lydie, and his brother George. Time Magazine ran a story about the competition and compared the competing designs.

The pioneer woman selected was not the ugly one executed by Mahonri Young; it was not the demure one executed by Jo Davidson; it was not the brawny one of James Earle Fraser, nor the placid one of Arthur Lee, nor the fragile one of F. Lynn Jenkins. Nor was it Maurice Sterne's, Hermon A. MacNeil's, Alexander Stirling Calder's, although these artists too were among those who made models for the competition.It was not John Gregory's sturdy female, snatching a musket from her moribund husband, although this one ran second in the balloting and won first place in three cities. Instead, it was Bryant Baker's striding figure of a woman whose skirts are blown backward in a prairie breeze, who carries a Bible in one hand, leads her scampish belligerent little boy with the other. This had received most votes in eleven cities; by far the largest total out of the 123,000 votes cast.

Baker's sculpture was unveiled in Ponca City in a public ceremony on April 22, 1930 when forty thousand guests came to hear Will Rogers pay tribute to Oklahoma's pioneers. President Hoover addressed the nation over a nation-wide radio network for the commemoration of the statue. "It was those women who carried the refinement, the moral character and spiritual force into the West," said Hoover. "Not only they bore great burdens of daily toil and the rearing of families, but there were intent that their children should have a chance, that the doors of opportunity," added Hoover. The finished statue of the Pioneer Woman Statue was 27 feet high and weighed 12,000 pounds.

After financial reverses that included the loss of his company Marland Oil Company, E. W. Marland wrote a letter to his friend Frank Phillips on March 11, 1940. "My financial condition compells [sic] me to sell objects of art, tapestries, bronzes, rugs, and paintings acquired by me in more prosperous years," wrote Marland. "I will sell at a price approximately 25 per cent of their cost to me... And will consider it a kindness if you will come yourself or send someone to look them over with the object of buying anything you fancy."

Phillips sent art expert Gordon Matzene to inspect the bronzes and began bargaining with Marland for their purchase. In the end Phillips offered Marland $500 for each of the twelve miniatures. Matzene declared that the purchase was a wonderful bargain and the miniatures were removed from Ponca City along with other statues and artwork to become part of Phillips' collection at Woolaroc where they are on display. 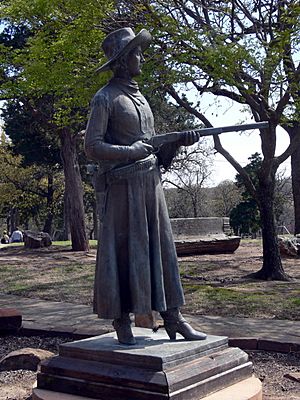 Statue of Belle Starr at Woolaroc

The admission fee is $12 for guests from ages 12 through 64, $10 for ages 65 and older, and free for children aged 11 and below. Woolaroc is open year-round from 10 a.m. to 5 p.m. CST Wednesday through Sunday and is closed during Monday and Tuesday. During the summer (Memorial Day through Labor Day), it is also open on Tuesdays. Bicycles are prohibited from entering the preserve.

All content from Kiddle encyclopedia articles (including the article images and facts) can be freely used under Attribution-ShareAlike license, unless stated otherwise. Cite this article:
Woolaroc Facts for Kids. Kiddle Encyclopedia.