The settlement of Fort Pierre developed around an 1832 trading post and fort situated on the west bank of the Missouri River, near the confluence with its tributary Bad River. An earlier American-owned trading post had been operating nearby since 1817, and in 2017 the city celebrated its bicentennial of continuous permanent settlement.

On March 30, 1743, Francois and Louis-Joseph Gaultier de La Vérendrye reached the area of present-day Fort Pierre during their expedition west from Quebec. They left a metal plate buried in a hill to mark their journey and claim the land for France. The Lewis and Clark Corps of Discovery Expedition met with the Teton Sioux on the south side of the mouth of the Bad River on 24–28 September 1804. Fort Pierre Chouteau was established in 1832 as a trading post and fort by St Louis industrial fur trader Pierre Chouteau, Jr. on the north side of the river's mouth to replace Fort Tecumseh, established 1822 and a mile to the north. 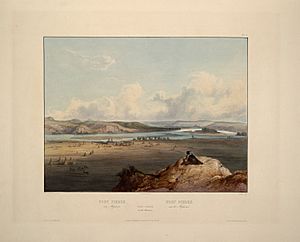 Fort Pierre and the adjacent prairie circa 1833. Fort Pierre on the Missouri: aquatint by Karl Bodmer from the book Maximilian, Prince of Wied’s Travels in the Interior of North America, during the years 1832–1834

There were 893 households, of which 30.5% had children under the age of 18 living with them, 51.6% were married couples living together, 9.7% had a female householder with no husband present, 4.3% had a male householder with no wife present, and 34.4% were non-families. 30.6% of all households were made up of individuals, and 11.2% had someone living alone who was 65 years of age or older. The average household size was 2.33 and the average family size was 2.86.

All content from Kiddle encyclopedia articles (including the article images and facts) can be freely used under Attribution-ShareAlike license, unless stated otherwise. Cite this article:
Fort Pierre, South Dakota Facts for Kids. Kiddle Encyclopedia.