Julesburg is the Statutory Town that is the county seat and the most populous municipality of Sedgwick County, Colorado, United States. The population was 1,225 at the 2010 United States Census.

The original trading post was named for Jules Beni. Julesburg was on the Pony Express (1860–1861) route from Missouri to California. 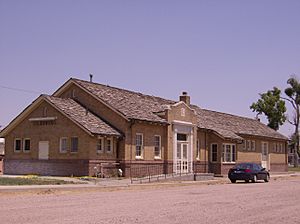 In 1858, Joseph A. "Jack" Slade, a superintendent for the Central Overland California and Pikes Peak Express Company, was tracking down horse thieves, including Jules Beni. Slade caught up with him at Julesburg, but Beni shot him five times. Everybody thought that Slade was dead and several angry townsfolk chased Beni out of Julesburg. When they returned, they found Slade struggling to his feet, having miraculously recovered.

Beni continued to steal horses from the Pike's Peak Express Company, and Slade vowed to hunt him down. Beni attempted to ambush Slade at Slade's own ranch at Cold Springs. But Slade found out about the planned ambush and, along with some of his cowboys, captured Beni. Slade did not take Beni to authorities but instead shot him dead while he was tied to a fence post. He shot off each of his fingers, and then put the gun in Beni's mouth and pulled the trigger. Afterward, he severed Beni's ears as trophies.

This account is among the Stories of the Century, a syndicated television series starring and narrated by Jim Davis, which aired on March 4, 1955. Gregg Palmer (born 1927) played the role of Slade, and Paul Newlan (1903–1973) portrayed Beni.

Julesburg was a large and prominent stagecoach station and the site of Fort Rankin (later Fort Sedgwick). In revenge for the Sand Creek Massacre, one thousand Cheyenne, Arapaho, and Lakota warriors attacked Julesburg on January 7, 1865. In the battle the Indians defeated about 60 soldiers of the U.S. army and 50 armed civilians. In the following weeks the Indians raided up and down the South Platte River valley. On February 2 they returned to Julesburg and burned down all the buildings in the settlement, although not attacking the soldiers and civilians holed up in the fort.

There were 613 households out of which 28.2% had children under the age of 18 living with them, 54.8% were married couples living together, 7.3% had a female householder with no husband present, and 33.6% were non-families. 31.2% of all households were made up of individuals and 14.2% had someone living alone who was 65 years of age or older. The average household size was 2.30 and the average family size was 2.86.

Julesburg was featured in the 1960 episode "The Story of Julesburg" of the syndicated television series Pony Express. It was the setting of the 1959 Randolph Scott film, Westbound. "Julesburg" is the title of the second episode (1955) of the ABC western Cheyenne.

All content from Kiddle encyclopedia articles (including the article images and facts) can be freely used under Attribution-ShareAlike license, unless stated otherwise. Cite this article:
Julesburg, Colorado Facts for Kids. Kiddle Encyclopedia.