Williamsville is a village in Erie County, New York, in the United States. The population was 5,300 at the 2010 census. The village is named after Jonas Williams, an early settler. It is part of the Buffalo–Niagara Falls Metropolitan Statistical Area.

Williamsville is located mostly within the town of Amherst, but Creek Road and Creek Heights in the south part of the village (near the Wehrle Drive underpass of the New York State Thruway) are in the town of Cheektowaga. The village is in the northeastern quadrant of Erie County.

Williamsville is also a postal ZIP code: 14221 (14231 for post office boxes); however, that ZIP code contains large sections of the town outside of the village and also includes significant commercial areas within Clarence.

The Williamsville Central School District is a school system covering Williamsville, most of the eastern part of Amherst, and a small portion of the western end of Clarence.

The community developed where the major road between Batavia and Buffalo crossed Ellicott Creek just above Glen Falls. The water power offered by the waterfall attracted millers. The first mill was built by Jonas Williams in 1811, giving the village its first name, "Williams Mills". It still stands today, next to Glen Park, and is known as the Williamsville Water Mill. Several other mills were built near Glen Falls during the 19th century. In 1841, a raceway was constructed to divert water from Ellicott Creek to the mills, creating an island known today as Island Park. A stagecoach stop, tavern, and inn was built along the main road near Ellicott Creek by Oziel Smith in 1832. Today it is known as the Eagle House. The close crossing of the main road and Ellicott Creek's Glen Falls was the initial attraction, around which Williamsville grew. The village was incorporated in 1850.

St. John Neumann served as founder and first pastor of SS Peter and Paul Roman Catholic Church from 1836 to 1840.

During the War of 1812, American troops were stationed in Williamsville in the area between Garrison Road and Ellicott Creek. American soldiers and British prisoners were treated in a field hospital and log barracks that lined Garrison Road. A small cemetery, located on Aero Drive between Wehrle and Youngs Road, was used to bury the men who did not survive. General Winfield Scott used the Evans House as his headquarters in the Spring of 1813 when his entire army of 5,000–6,000 men were stationed in Williamsville. In 1813, when the British burned Buffalo, people fled to the safety of Williamsville and nearby Harris Hill.

In 1850, the village of Williamsville was one of the 500+ incorporated villages by New York State

In 1983, Williamsville passed a Historic Preservation Code to conserve its old buildings.

Every summer in Williamsville, Old Home Days is held in Island Park, located directly on Main Street in the village. The Carnival begins with a parade on the opening Tuesday, and for four days, thousands of people ride the rides, enjoy the food, and see the people Williamsville has to offer. The festival is in remembrance of several women who in the mid-19th century would come to the park once a summer to drink tea and catch up on the years past.

In 2010, government downsizing activist Kevin Gaughan campaigned to dissolve the village government. After a highly contentious campaign, a dissolution referendum was held on August 17, 2010, where voters rejected dissolution by a 5–1 margin.

The water mill at Glen Falls 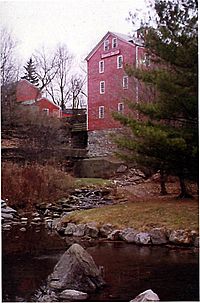 A view of the mill from the creek

Williamsville has several parks. Glen Park, 10 acres (4.0 ha) (the site of an amusement park in the 1940s and 1950s), offers views of Ellicott Creek as it falls over the Onondaga Escarpment, forming the 27-foot-high (8.2 m) Glen Falls; Island Park has a large pavilion and is the site of Old Home Days and the Taste of Williamsville events during the summer.

Williamsville boasts 11 sites that have been designated as historical sites. 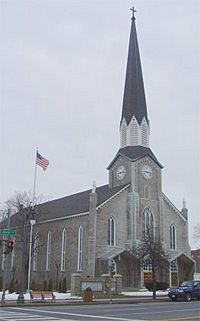 As stated above the big festival in Williamsville is Old Home Days and there also is the taste of Williamsville. During the summer there is also a musical festival on Main Street where local bands play on street corners during various days.

Other recreational facilities in town include a rollerskating rink and the 1.5-mile (2.4 km) Lehigh Valley Railroad Path.

According to the United States Census Bureau, the village has a total area of 1.2 square miles (3.1 km2), all land.

Main Street is part of the east–west New York State Route 5 (NY 5). Joseph Ellicott had the "Great Iroquois Trail", an ancient path from the Hudson River to Lake Erie, improved. It was known as the "Buffalo Road" and, later, "Main Street". North Union Road, part of NY 277, is a major north-south road through the west end of the village. Transit Road, surveyed by Joseph Ellicott, was named for an important surveying instrument. Transit Road marks the boundary between townships (Amherst and Clarence, Cheektowaga and Lancaster, inter alia. Joseph Ellicott's surveys of western New York divided the Holland Purchase land into a grid of more or less square of townships with boundaries aligned north-south and east-west, a system related to the Public Land Survey System (PLSS) used in most of the rest of post-colonial America. In western New York, strict accordance to the PLSS was not required or followed, since the land was not federally owned, but had passed directly from the Seneca Indians to land speculators such as the Holland Land Company.

The New York State Thruway (Interstate 90 or I-90) passes through the south part of the village and connects to I-290. A Thruway toll plaza located near the village has been a matter of controversy for years and recent proposals suggest it may be moved farther east.

There were 2,534 households out of which 14.6% had children under the age of 18 living with them, 36.7% were married couples living together, 9.9% had a female householder with no husband present, and 50.6% were non-families. 44.4% of all households were made up of individuals and 20.5% had someone living alone who was 65 years of age or older. The average household size was 2.01 and the average family size was 2.87.

All content from Kiddle encyclopedia articles (including the article images and facts) can be freely used under Attribution-ShareAlike license, unless stated otherwise. Cite this article:
Williamsville, New York Facts for Kids. Kiddle Encyclopedia.