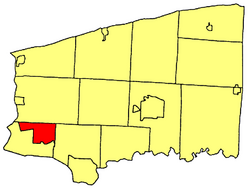 Niagara is a town in Niagara County, New York, United States. As of the 2010 census, the town had a total population of 8,378. The town is named after the famous waterfall Niagara Falls.

The Town of Niagara is the neighbor to the City of Niagara Falls, which is next to the famed Niagara Falls. The town is located in the southwest corner of the county. Also located partially within the town is Niagara Falls International Airport, which serves the Niagara County area.

It is served by the LaSalle Post Office on Niagara Falls Boulevard (U.S. Route 62) in adjacent Niagara Falls, New York. Residents use a mailing address of "Niagara Falls, NY" because of this. Neither "Niagara, NY," nor "Town of Niagara, NY" are acceptable postal addresses, according to the United States Postal Service.

The Town of Niagara was founded in 1812 (originally as the "Town of Schlosser" after the local fortification Fort Schlosser and after Captain Joseph Schlosser, a German officer in the British Army) from the Town of Cambria. In 1836 western parts of the town were organized as the Town of Wheatfield, New York.

In 1892, the City of Niagara Falls was formed from the eastern end of town, taking about half of its land. In 1903, the city annexed another quarter of the town, reducing its size to 9.4 square miles. Its borders have remained the same since.

According to the United States Census Bureau, the town has a total area of 9.4 square miles (24 km2), all of it land.

Major highways in the Town of Niagara

Major employers in Niagara are retail stores along major routes in town, including:

All content from Kiddle encyclopedia articles (including the article images and facts) can be freely used under Attribution-ShareAlike license, unless stated otherwise. Cite this article:
Niagara, New York Facts for Kids. Kiddle Encyclopedia.