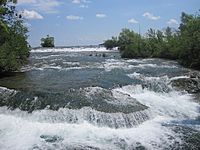 The Three Sisters Islands are islands which lie off the south shoreline of Goat Island. The islands are part of Niagara Falls, New York.

Before European settlers arrived in North America, Iroquois shamans made sacrifices of food and gifts on the islands and communed with He-No (Mighty Thunderer), the spirit who dwells in the mist-enshrouded cave at the base of the falls. Modern day psychics believe any one can hear the voices of the spirits if they listen carefully while visiting the Three Sisters Islands. Each island supports a variety of microhabitats and has its own floristic character. The Three Sisters Islands are connected by bridges, allowing pedestrians to walk to all three for grand views of the raging rapids in the Niagara River right before its descent over the Horseshoe Falls.

All content from Kiddle encyclopedia articles (including the article images and facts) can be freely used under Attribution-ShareAlike license, unless stated otherwise. Cite this article:
Three Sisters Islands (New York) Facts for Kids. Kiddle Encyclopedia.