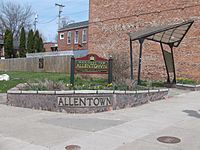 Sign at the corner of Main and Allen streets

Allentown is named after Lewis F. Allen (1800-1890) who came to Buffalo in April 1827 to serve as Corporate Secretary and Financial Manager of an Insurance company. Allen was also a farmer and when looking for space to let his cattle pasteurize, purportedly his neighbor, Thomas Day, suggested some of his land, which sat between the cities of Buffalo and Black Rock. Allen’s cattle path became known as Allen Street. Notably, Allen was one of the founders of the Buffalo Historical Society and Forest Lawn, where he is buried. Allen was married to Margaret Cleveland Allen and was the uncle of president Grover Cleveland. Allen introduced his nephew to many influential people, including the partners in the law firm of Rogers, Bowen, and Rogers where Cleveland later took a clerkship which led him to practice law and enter into politics.

Allentown is the first neighborhood north of the Downtown Buffalo core. It borders the downtown theater and entertainment district to its south, and runs north to North Street at its northern edge, Plymouth Avenue on the west, and Main street on the east. The neighborhood is generally centered on Allen Street and Elmwood Avenue.

Allentown is known for its community of artists, for its embrace of bohemian, hipster and gay culture, and for the civic commitment of residents to the historic and aesthetic sensibilities of the neighborhood. Allentown is one of Buffalo's premier areas for nightlife, dining, and antique shopping.

The Allentown Historic District is a historic district that was listed on the National Register of Historic Places in 1980, and expanded in 2012. It includes the Kleinhans Music Hall which is separately listed on the NRHP and is further designated as a National Historic Landmark. Also listed on the NRHP is the Birge-Horton House on Delaware Avenue.

The original 1980 boundaries include approximately 733 buildings, not including secondary structures. Of these, 6 are Gothic Revival, 125 Italianate, 24 Second Empire, 92 Shingle style, 106 Queen Anne, 15 Stick, 5 Shingle, 56 Colonial and 196 are plain framed buildings.

Three park areas are included in the area, two redesigned by Frederick Law Olmsted and one circle, Symphony Circle, designed by him as part of his master plan for the city's park areas. After he completed the master plan, Olmsted returned to redesign and landscape Day's Park (named after Allen's neighbor Thomas Day who donated his land to the City of Buffalo) and Arlington Park; two existing city parks. In Day's Park he added a circular walkway in front of the school so the students would not trample the grass. The circular sandstone planting area that was in the center of the walkway is still in existence. Arlington Park was home to Frank Lloyd Wright while he worked in Buffalo.

The new boundaries added about 320 properties to the list.

The Allentown Art Festival, originally known as the Buffalo Art Festival, is an event started by Jason Natowitz in 1958, beginning as a small town meeting to stimulate business in the neighborhood. The meeting triggered the foundation of the Allentown Village Society, and, by August, plans were in the works for an outdoor art show in the town, which occurred the following month in September 1958. With only 50 artists, the event quickly became very successful. Louis Cherenzia, another one of the founders, noted "It was rated as the most colorful cultural event in Buffalo since the Pan-American Exposition." Following the event, the town recognized its success, and announced plans for a second annual.

"The Buffalo Art Festival" quickly came to be identified with its more precise location, Allentown, and eventually its name became "Allentown Art Festival."

All content from Kiddle encyclopedia articles (including the article images and facts) can be freely used under Attribution-ShareAlike license, unless stated otherwise. Cite this article:
Allentown, Buffalo Facts for Kids. Kiddle Encyclopedia.