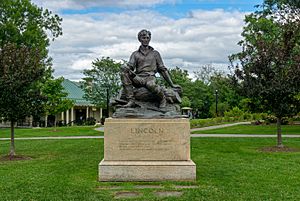 Statue of David in Delaware Park

Delaware Park–Front Park System is a historic park system and national historic district located in the northern and western sections of Buffalo in Erie County, New York. The park system was designed by Frederick Law Olmsted and Calvert Vaux and developed between 1868 and 1876.

The park system was listed on the National Register of Historic Places in 1982.

The centerpiece of the Buffalo, New York parks system and located in the North Buffalo neighborhood. The 376-acre (152 ha) park was named simply The Park by Olmsted; it was later renamed Delaware Park because of its proximity to Delaware Avenue, Buffalo's mansion row. It is divided into two areas: the 243-acre (98 ha) "Meadow Park" on the east and the 133-acre (54 ha) "Water Park", with what was originally a 43-acre (17 ha) lake ("Gala Water"), on the west. The 12-acre (4.9 ha) ravine and picnic grove on the south side of the lake comprise a subdivision of the latter. A widening of Scajaquada Creek, which flows westward through the park, is called Hoyt Lake (originally Mirror Lake). The lake was a feature during the Pan-American Exposition. The Scajaquada Expressway bisects the park west to east.

The Albright-Knox Art Gallery occupies the park's western edge, overlooking Hoyt Lake, and the Buffalo History Museum is situated on its northern edge, overlooking Scajaquada Creek. The park is home to Shakespeare in Delaware Park, a summer tradition since the mid-1970s, and the second largest free outdoor Shakespeare festival in the United States (after New York City's). It is also the location of the Buffalo Zoo on the east side of Meadow Park. The park also has a golf course, four baseball diamonds, cross country running, tennis courts, and a few soccer fields.

The park is also home to a noted replica of Michelangelo's David. The statue was dedicated in 1903, one of only a few made directly from the original sculpture but included a fig leaf which was not present in the original. When the statue was rededicated in 2013, it was given a new plaque which corrected the spelling of the artist name from Michael Angelo to Michelangelo.

Originally Chapin Place, a 5-acre (2.0 ha) plot measuring 500 by 420 feet (150 by 130 m) at the intersection of Delaware Avenue, Lafayette Avenue, and Chapin Parkway. The circle's center contains a monumental sunken fountain constructed in 1904. 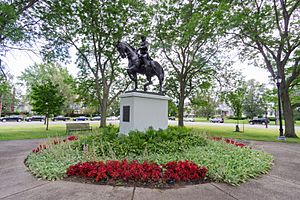 A 300-foot-diameter (91 m) circle at the intersection of West Ferry Street, Massachusetts Street, and Richmond Avenue.

Originally known as just The Circle. A 500-foot-diameter (150 m), 4.5-acre (1.8 ha) circle at the juncture of Porter Avenue with Richmond Avenue, North Street, Pennsylvania Street, and Wadsworth Street. Due south of the circle lies First Presbyterian Church, Buffalo's oldest congregation. Kleinhans Music Hall is located on the southeast side of the circle; it was designated a National Historic Landmark in 1989. The circle is located within the Allentown Historic District.

Formerly Prospect Park; located at the intersection of Niagara Street and Porter Avenue; the site of the Connecticut Street Armory. The park is located adjacent to D'Youville College and is home to a branch of the Buffalo & Erie County Public Library. The Shelter House (ca. 1908) is a contributing structure.

Formerly The Front; a 32-acre (13 ha) park located at the beginning of the Niagara River and overlooking Lake Erie. The park is home to the U.S. entrance to the Peace Bridge, erected in 1927 on the site of the former Fort Porter, and includes baseball diamonds, large open playing fields, and tennis courts. The park contains a monument to Commodore Oliver Hazard Perry. The Picnic Shelter (ca. 1900) is a contributing structure.

All content from Kiddle encyclopedia articles (including the article images and facts) can be freely used under Attribution-ShareAlike license, unless stated otherwise. Cite this article:
Delaware Park–Front Park System Facts for Kids. Kiddle Encyclopedia.