Founded in 1875, the Buffalo Zoo, located at 300 Parkside Ave in Buffalo, New York, is the seventh oldest zoo in the United States. Each year, the Buffalo Zoo welcomes approximately 400,000 visitors and is the second largest tourist attraction in Western New York; second only to Niagara Falls. Located on 23.5 acres (9.5 ha) of Buffalo's Delaware Park, the zoo exhibits a diverse collection of wild and exotic animals, and more than 320 different species of plants. The zoo is open year-round. 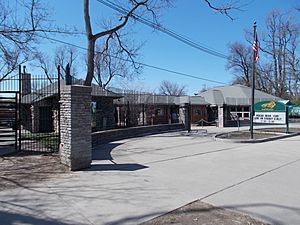 The zoo traces its history to the mid-19th century when Jacob E. Bergtold, a Buffalo furrier, presented a pair of deer to the city of Buffalo. To provide the deer with room to graze, Elam R. Jewett, the publisher of the Buffalo Daily Journal, offered to house the deer on his estate. Simultaneously, plans were being made for the municipal North Park (today's Delaware Park), and Mayor William F. Rogers hired landscape architect, Frederick Law Olmsted, to include a zoo as part of the park's design. Five years after, the deer were donated, more animals were added to the collection, and the first permanent building was erected, signifying the establishment of the Buffalo Zoological Gardens in 1875.

The zoo underwent a large expansion during the Great Depression and became a major work site for the Works Progress Administration. Among the new structures was the Buffalo Zoo Entrance Court at Parkside Avenue and Amherst Street. It was designed by African-American architect John Edmonston Brent (son of architect Calvin Brent) and built 1935–1938. The Buffalo Zoo Entrance Court was listed on the National Register of Historic Places in 2013.

Throughout the next several decades, more exhibits and facilities were added, including the Reptile House (1942), Children's Zoo (1965), Giraffe House and Veterinary Hospital (1967), and The Gorilla Habitat Building (1981). The zoo's mission also began to change during the 1980s and 1990s under the direction of Minot Ortolani, as it began reducing the numbers of animals in its collection to focus on the breeding of endangered species that might not otherwise have a chance at survival. In addition to its conservation efforts, the zoo also placed more of an emphasis on education to teach visitors about the animals and their natural habitats. From 2000 - 2017 the President/CEO of the zoo was Dr Donna M. Fernandes, with Norah B. Fletchall succeeding her in 2017.

In 2002, a 15-year Master Plan was unveiled to transform the zoo. New visitor amenities and naturalistic habitats were planned, including the Asian River and Highlands Zone, African Watering Hole, Arctic Edge, and the Wonders of Water Children's Zoo. Phase One of the Master Plan has resulted in the opening of the Vanishing Animals exhibit, EcoStation, Otter Creek, and Sea Lion Cove. The completion of Phase One was marked by the September 10, 2008, opening of the South American Rainforest, a four-season attraction that features a two-story waterfall, dozens of colorful free-flighted birds, and a variety of other rainforest species. These include ocelots, blue poison dart frogs, and many other animals you can find in the rain forest. In the fall of 2015 the $14 million Arctic Edge opened to the public featuring Arctic wolves, bald eagles, Eurasian lynx and polar bears. In 2016 the Arctic wolves were replaced by Arctic foxes which fit the size of the exhibit better than the wolves. Arctic Edge is currently home to two polar bears Anana and Luna. Luna is the offspring of Anana and Nanuq, Nanuq now resides at the Columbus Zoo.

In August 2018, the zoo announced it would be sending its two Asian elephants Jothi and Surapa to the Audubon Zoo in New Orleans due to being unable to care for them anymore. They arrived at the Audubon Zoo later that year.

In early June of 2020, a red-footed tortoise was reportedly stolen from the Buffalo Zoo. There was an ongoing police search, but the tortoise, 'Red', was never found.

The Buffalo Zoo is currently fundraising for a remodel of the historic Reptile House. The refurbished Reptile House will feature Komodo dragons and dwarf crocodiles.

All content from Kiddle encyclopedia articles (including the article images and facts) can be freely used under Attribution-ShareAlike license, unless stated otherwise. Cite this article:
Buffalo Zoo Facts for Kids. Kiddle Encyclopedia.